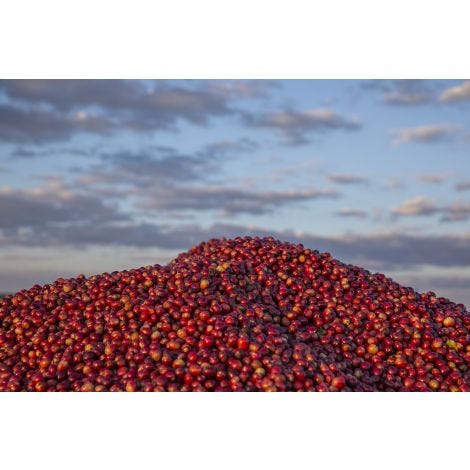 This specially prepared natural process coffee comes from Ngoli and Kateshi estates in the Northern province of Zambia. This season a naturally processed microlot from Ngoli estate won the 2019 Zambia Taste of Harvest competition and placed 2nd in the regional African competition, competing against the winning lots from other African origins.

The Kateshi & Ngoli coffee estates are located in the Zambia's Northern province at 1,300 and 1,400masl respectively. The estates cover a combined area of 1,726 hectares of land, of which 1,039 are planted with coffee, and 687 are dedicated conservation areas and buffer zones. Both estates carry Rainforest Alliance, Utz and 4C certification and cultivate a wide range of varieties including Catimor 129, F6,b Castillo, Java, and other trial varieties.

The estates are also involved in a number of social initiatives.

- Olam sponsors a primary and secondary school on Kateshi estate which currently caters for 1,147 students in surrounding villages.

- With a distance of over 20 miles to the nearest health post, healtcare for communities near Kateshi estate was frequently out of reach. In response, Olam constructed a health clinic on Kateshi estate which provides free access to basic healthcare for 4,120 members of the community. Staff estimate that an average of 10 lives per month are saved by the presence of the clinic.

- The estates are partnered with Water Resource Management Authority and development organisations like GIZ and SNV to reduce water risk and ensure drinking water security in the Chambeshi catchment area.

- In a concerted effort to empower local women, Kateshi is the first and only coffee estate to employ women in traditionally male-dominated roles such as tractor driving and large equipment operation.

- Unsustainable forest use in the region has led to soil erosion, land degradation and the drying out of the Lukupa river in 2016. Olam have launched an afforestation which offers sustainably produced firewood to locals in an effort to protect and restore native ecosystems

This coffee is naturally processed on raised African beds. Cherries are selectively harvested before being double handpicked to ensure only the ripest, highest quality are processed. The selected cherries are dried on African beds for 18-24 days depending on ambient conditions. Shade nets used to diffuse sunlight and ensure an even drying process. Once the optimum moisture content has been reached the coffee is rested in a cool environment before being milled, graded by bean size and sorted to remove any remaining defects.

The Northern province of Zambia shares its borders with Tanzania to the East and D.R. Congo to the North. It also occupies the southern shore of Lake Tanganyika - the world’s longest fresh-water lake, and the largest in Africa by volume. The Northern province has the best conditions for arabica coffee cultivation in Zambia with its relative proximity to the equator and abundant altitude (Mafinga Hills being the highest point in the country at 2,300masl). The local economy is dominated by agriculture with coffee being a primary cash crop alongside subsistence crops such as maize, millet, groundnuts and beans. The mountainous terrain and lack of transport infrastructure makes this region challenging to work in, but also one most in need of the investment and development which the coffee industry can bring.

Ancient volcanic soils and honey processing help produce the complex flavor profile of this coffee. It is an exploration worthy of the country that is home to the smoke that thunders. Long before Dr. Livingston arrived to name Victoria Falls after the queen, the people who had lived around this wonder of the natural world for generations had already named it more appropriately, “the smoke that thunders.” The falls thunder into the Zambesi River, which flows east toward Mozambique. But before the river crosses the border, take a left and head north up the Luangwa River. You’ll move through land rich in biodiversity, including the world’s largest concentration of hippos. As the river meanders and the altitude rises you will reach Mafinga plateau and Zambia’s largest coffee growing region which stretches all the way to the border with Tanzania.