The store will not work correctly in the case when cookies are disabled.
C-Market: $2.26 USD 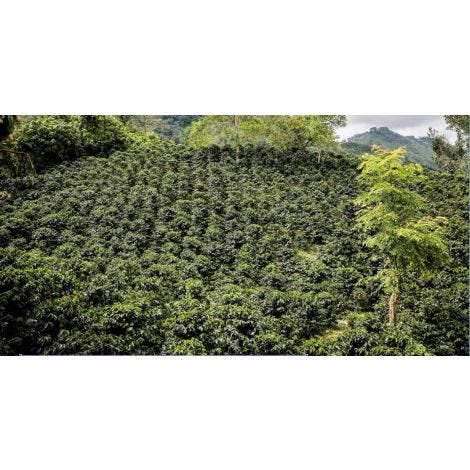 This is a washed Excelso grade coffee from various smallholders in the region of Quindío. This lot was sourced in collaboration with Azahar Coffee Company and has been expertly decaffeinated using a solvent-based ethyl-acetate method.

This lot is blended from various producers in the municipalities of Calarca, Cordoba, Genova and Pijao, in the Quindio department of Western-Central Colombia. Farms range between altitudes of 1,500 - 2,000masl and cultivte the varieties of Colombia, Castillo and Caturra.

This coffee utilises a washed process prior to decaffeination. Ripe cherries are selectively handpicked depulped and then traditionally fermented in tanks for 12-24 hours to break down the remaining mucilage. At this point the coffee is thoroughly washed in clean water, followed by natural drying in parabolic dryers for 10-12 days, with some drying finished off mechanically.

The decaffeination process is solvent based, and the agent used for the process is ethyl-acetate (also known as ethyl-alcohol). It is derived from a mix of acetic acid (vinegar) and a natural extract distilled from sugar cane, blackberries, beets or sometimes grapes. A direct-solvent process is used meaning that the beans are steamed to open their pores and are then rinsed in ethyl acetate repeatedly to remove the caffeine. Next the beans are dried but not completely, 10-12% humidity remains, and then the open bean is sealed with natural wax that in no way affects the flavor, fragrance or aroma of the coffee.

Despite living in an area severely afflicted by civil war until quite recently, the people of Quindío are hard-working and friendly. They carry in their DNA the fierceness that defined the indigenous Pijao people, who inhabited this territory before and during the days of the Spanish colonization. This decaffeinated blend hails from the lush, evergreen hills of four of the twelve municipalities of this department, which is located in the central Colombian Andes mountain range. Quindío is technically the second smallest department by area. Until 1967, Quindío belonged to the neighboring department of Caldas. Along with Caldas and the departments of Risaralda and Tolima, Quindío is part of a region known as the Eje cafetero, the Colombian Coffee Growing Axis, or Coffee Triangle, which historically used to produce most of the country’s coffee.

This Decaf Quindío Blend marries the varied attributes of coffees grown throughout the municipalities of Calarcá, Córdoba, Pijao and Génova, which are geographically stalked in this very order, running north to south, composing the eastern flank of the department, on the border with Tolima.

Calarcá is located only four kilometers from the departmental capital city of Armenia, and only became a municipality recently. This municipality has Quindío’s second largest population of approximately 80,000 people. It was named after a cacique (chief) of the Pijao tribe named Calarcá, who ruled neighboring territories that are now part of the department of Tolima. It is a mainly coffee-producing area and hosts the annual Fiesta nacional del café. Of Calarcá’s 21,923 hectares (or square kilometers), 21,679 are in the rural sector.

The true inhabitants of Córdoba were the bellicose Quimbaya people. The Quimbayas had forcefully taken the region we know today as Caldas, shortly before the arrival of the Spanish. During this conquest, they assassinated the aforementioned cacique Calarcá. Córdoba is located directly on the central cordillera’s slopes, in a narrow valley known for its plantain production, approximately 27 kilometers from Armenia.

The municipality of Pijao’s capital is a picturesque and colorful town surrounded by steep, coffee-covered hills. It is located 32 kilometers from Armenia and driving there requires traveling on dirt roads that twist and turn abruptly and constantly. Pijao is the only city in South America to be recognized by the international slow food movement having received Cittaslow designation from the Italian Cittaslow foundation for its populations’ (almost 7,000 strong) commitment to local and sustainable agriculture.

The municipality of Génova is named after the Italian city by the same name. Génova spans a total surface area of 29,789 square kilo- meters. Located 52 kilometers from Armenia, this municipio has a population of 12,000, and it borders Pijao to the north, Tolima to the east, and the department of Valle del Cauca to the west. Génova’s mountainous terrain is home to several thermal floors making it an excellent location for varied agricultural pursuits such as growing coffee, yuca and plantains. Ranchers graze their cattle on the highest slopes of Génova, which is also known nationally for its extreme sports offerings and many clearwater lagoons.