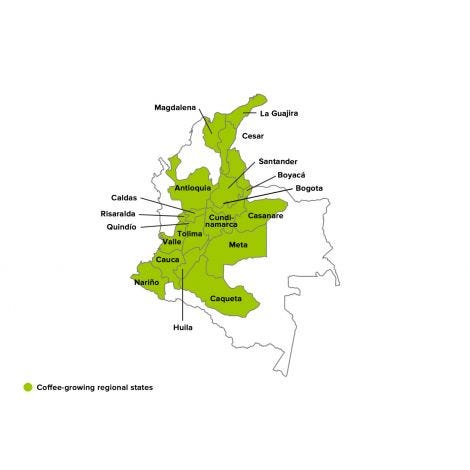 An Olam premium brand specialty coffee, Colombia Dulima is an Excelso EP grade coffee sourced from high altitudes in the Tolima and Huila growing regions. Half of every hand-selected lot is guaranteed screen 17/18 or higher. As an excellent single origin or a consistent blender, this washed coffee is smooth and clean, with a pointed acidity and good body.


The spread of coffee planting throughout Colombia in the early 19th century is attributed to a priest who made coffee planting a penance for his parishioners. It worked. Colombia is among the largest producer of coffee in the world, and was number two behind Brazil for decades. The Tolima growing regions is named after the Tolima district, which was home to Pijaos people before the Spanish arrived. The Pijaos were known among the Spaniards as fierce defenders of their homeland, which they called Dulima.

This coffee can stand alone as a dynamic single origin cold brew with sweet, dark chocolate, red grape and orange rind flavors. It can also be blended with our Brazil Eagle Espresso Blend to achieve a nice mellow milk chocolate and browning sugar sweetness, plus a touch of dynamic citrus zest and red fruit flavor in the background. We recommend proportions of 70 Brazil Eagle Espresso / 30 Colombia Dulima for this flavor profile.