Why Build a School in Zambia? 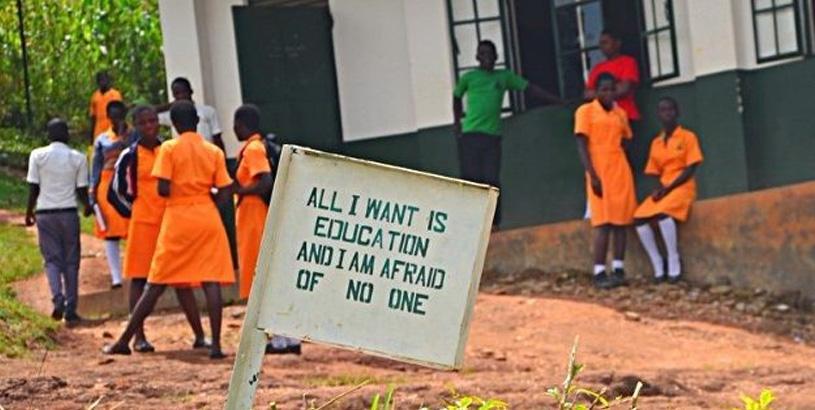 Why Build a School in Zambia?

You know the story about the starfish, right? Of course, you do. Since Loren Eiseley published the essay entitled The Star Thrower in 1968, his parable has been adapted, revised, retold countless times, usually in a context we might call “motivational,” and the chances are better than good you’ve come across it a few times. It feels like there are almost as many versions as there are tellings—I will tell my own version in a few minutes, just in case you’ve forgotten the story—and indeed stories with the same message but featuring something other than starfish, sometimes presenting disturbing choices, might be as old as the act of storytelling itself. The two characters in the story, let’s call them the walker and the thrower, are often an old man and a boy, but their roles in the story can switch. Sometimes the thrower is someone important to one world view or another. Sometimes the walker joins the thrower after a moment of enlightenment. Sometimes there are extended narratives before, after, or before and after the key moment. At least once, the story has been told from the point of view of one of the starfish. As with any parable, the starfish story is vulnerable to criticism as presenting too simplistic a frame around the world as it is and as it should be, but this sort of critique is usually directed toward the moralizing that follows the telling and the stretching of the metaphor in an attempt to capture tactics and strategy. These critiques, but also and often the telling of the story too, tend to miss the point, I think. 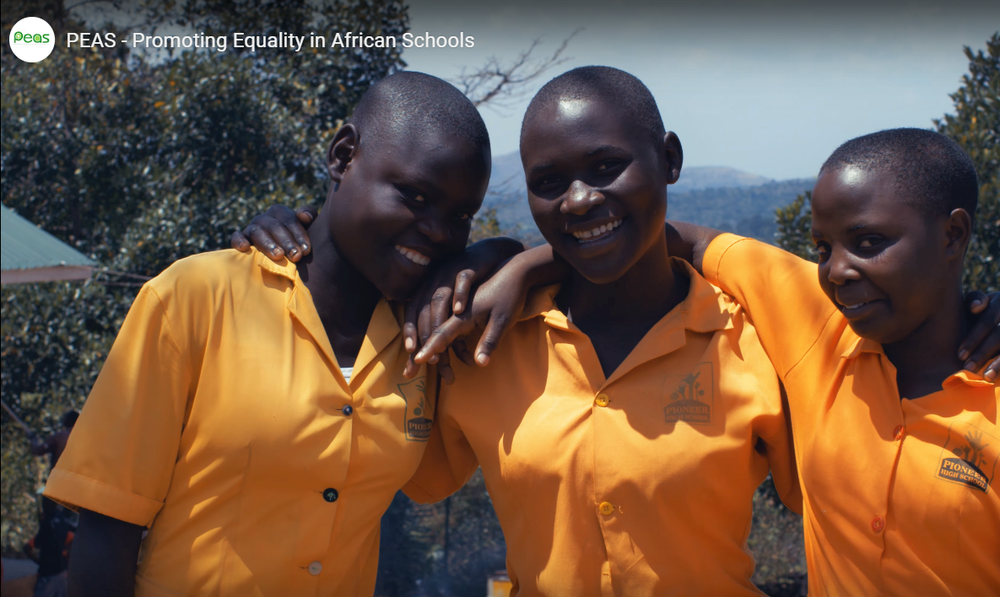 This and Header Photo by PEAS

Why would Olam help build a secondary school in Zambia? Yes, because it makes a difference and we grow coffee in Zambia and Olam is committed to positive social and environmental impacts wherever it does business. That is a correct answer. But also, just as important while sometimes unmentioned, because it is simply part of who we are as a company. Olam chooses to proactively pursue the 8 principles in our Livelihood Charter, and it is a choice; however, seeing no other choice but to operate our business in this manner is fundamental to our identity. In Africa, only 1 out of 3 students who receive a primary school education go on to attend secondary school. The schools just aren’t there and where they do exist they are often out-of-reach financially and geographically. The challenge is even ore pronounced for girls. The nonprofit organization, PEAS (Promoting Equality in African Schools) has been working to change the availability of education in Africa since 2008, opening 28 successful schools in Uganda. For PEAS, success means Access, Quality, and Sustainability. Access PEAS focuses on building schools in the poorest areas and ensures fees allow for even the poorest students to attend. They also focus on ensuring at least 50% of students are girls. Unlike more traditional secondary schools in Africa, PEAS schools will admit and provide support to students who may have performed below average in primary school. Quality PEAS focuses on continuing professional development for teachers and administrators. Students who performed poorly or spent less time in primary education score better on tests as a result of attending PEAS schools than they do attending traditional schools or even private schools. Sustainability For PEAS schools, sustainable mean the goal of financial stability and independence from foreign aid. Full-capacity PEAS schools are not only self-sustaining, but overall spend less per student than traditional schools while out-performing those schools and working with the most disadvantaged students. 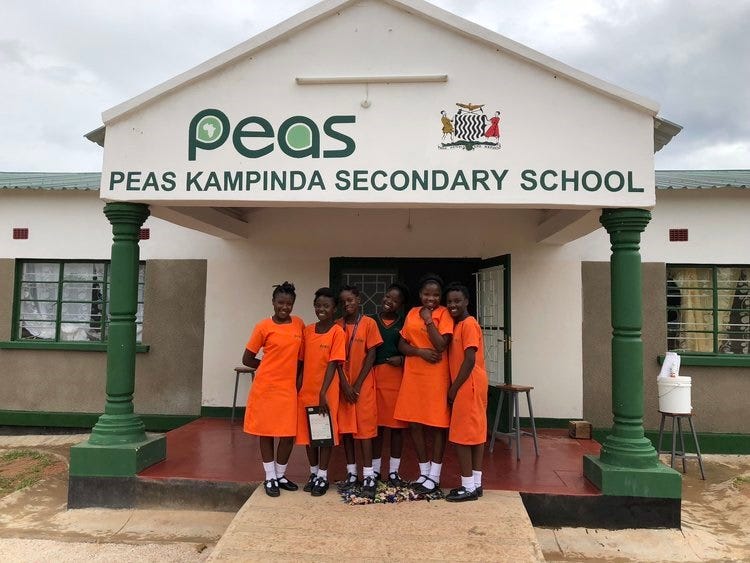 So, when PEAS decided to open a school in the Kasama district of northern Zambia, where Olam grows coffee and buys coffee from smallholders, we wanted to be a part of the effort—needed to be part of the effort—and helped fund the building of PEAS Kampinda School, which consists of 4 classroom blocks, 2 science labs, a girl’s dormitory, a kitchen, and administrative offices. This month, PEAS Kampinda School will celebrate its one-year anniversary along with several milestones:   Now, as promised, yet another retelling of the starfish story. 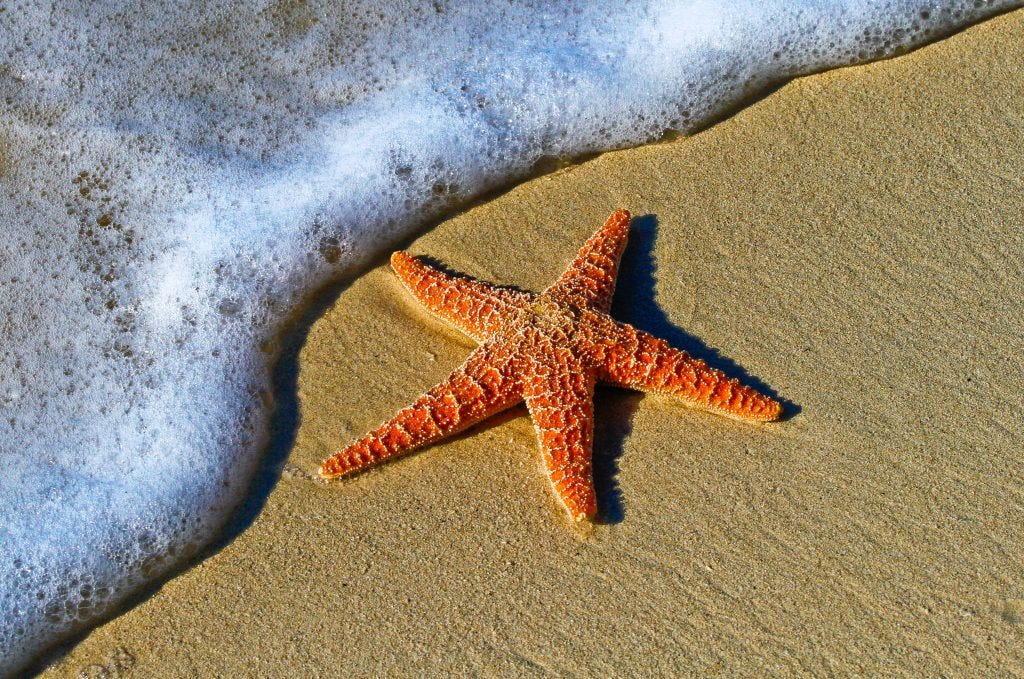 Walking on the beach at sunset is nice enough, you think, but you prefer the mornings, when the sun floats on the horizon as a promise and you can imagine rather than remember the day. And a beach early in the morning is always less crowded than a beach at sunset. This is what you’re thinking about, how many people you might see on the beach this morning, when you see someone in the distance. It looks like a girl and it looks like she is digging in the sand, or maybe collecting seashells and tossing the broken ones into the water. That’s when you notice the starfish, almost step on one, in fact. Then you notice several more, and as you walk you see that the shore, above the current tide line, is crowded with stranded starfish. Even before you’re close enough to the girl to see for sure what she is doing, you know what she is doing. She’s throwing starfish back into the ocean, rescuing a few before the sun can get to them. As you draw close you say hello and then, out of a kind of distracted curiosity more than any challenge, just above a murmur you say something about how many starfish there are. It’s like you feel overwhelmed on her behalf and more to yourself than to her you say, “There’s so many, you can’t help them all, it won’t really matter.” The girl gently under-hands another starfish into the water and then looks up at you, shielding her eyes from the sun. She half smiles, half smirks, then shrugs and looks back out at the waves. “It mattered to that one,” she says. Her comment lifts your stupor and now you’re even more curious. “Okay,” you say, “fair enough. But why are you doing it?” She answers you as she bends over to pick-up another starfish. “Well, I’m here,” she says, “and I couldn’t just keep walking. That’s not who I am.” Then, without looking at you, she asks, “Is that who you are?”
3 years ago
65 view(s)