The Evolution of Coffee Cupping 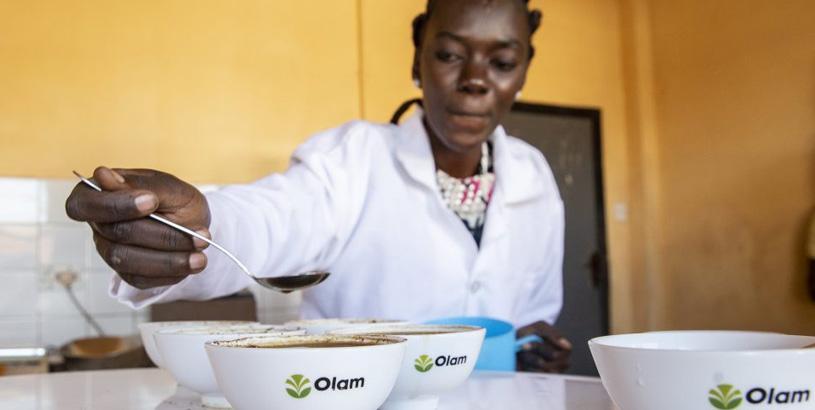 The Evolution of Coffee Cupping

Whenever you cup test nickel-weight samples of a new chop from your jobber, grind to the fineness of corn-meal, have your cuspidor nearby, and remember that breaking the scrum is an important part of the test.

A hundred years ago, this is how the activities in a coffee cupping lab might have been described. While some of the terminology can still be heard today ( a “chop” of coffee is still used, usually in commercial coffee trading, to refer to a shipment or portion of a shipment with identical coffee under the same mark; and people might look at you funny, but you can still call your spittoon a cuspidor, Portuguese for “spitter,” if you like), at least one of these words has fallen completely out of favor and is unlikely to return. The word “scrum” was replaced by the word “crust” long ago.

The phrase “cup testing” was used early in the development of taste evaluation procedures for coffee. Prior to the 1890’s, quality inspections for coffee were mostly visual. Coffee quality was judged and price determined by the size and color of green beans. By 1932, when Tea & Coffee Trade Journal published an article by B.D. Balart on taste testing, the title was “Removing the Guess Work from Coffee Cupping.” Nevertheless, when you look up “cupping” in the index of the 1935 edition of All About Coffee, it says, “See Cup-Testing.”

Creation of the cup quality test as a means for evaluation of coffee is generally, though not exclusively, attributed to San Francisco green broker Clarence E. Bickford, active until his death in 1909. On the roasting side, Hills Bros., was an early adopter of the cup quality approach. If they were going to pay a quality premium, they wanted it based on cup characteristics, something they too could charge more for, not the size and color of the bean, because high-grown smaller beans tended to taste better. Cup testing is one of many coffee innovations to emerge out of San Francisco’s dynamic coffee sector as the century turned, becoming more important as the amount of Central American coffee arriving at that port increased. Although cup testing technique was advanced and developed by many coffee professionals, B.D. Balart was one of the earliest to clearly articulate, if not create, a complete and formal procedure. (The “B” in “B.D.” comes from his nickname, “Bert.” His Spanish birth name was Dagoberto).

Born in New Orleans in 1883, around the time Bickford first began exploring cup quality as an evaluation approach, Balart and his family relocated to San Francisco just as the “gold rush” roasters were coming into their own on the west coast and pushing east to the Rockies. His father died in a hunting accident in Napa when he was 18. By the time he was 21, he was a competitive cyclist, or “wheelman,” and working for Ceylon Tea Company. Balart then went to work at wholesale grocer, Wellman, Peck & Co., which had a significant coffee business and where his duties may have included driving because in 1909, at age 26, he was registered with the state of California as a chauffeur. In 1913, he and his wife purchased a house at 133 Capp Street, a house that appears to still be standing, from his mother. He then went to work at importer/exporter, American Finance and Commerce Company, where his responsibilities included travel to coffee growing countries. In 1920, Balart was elected to the Executive Committee of the two-year-old Green Coffee Association of San Francisco, forerunner to the Pacific Coast Coffee Association. In 1921, the national “Export Trade Directory” listed him as Assistant Manager at the American Finance and Commerce Company.

In 1922, Balart moved to the roasting side of the industry when he purchased a controlling interest in Bain-Alexander after Mr. Bain retired. The company became Alexander-Balart and B.D. its vice president. It appears this is also when his interest in “removing the guesswork from coffee cupping” began. The Alexander-Balart Company would go on to create the brands Million Dollar Coffee, Tillman Coffee, and Alta Coffee.

Even though cupping labs have evolved over the years, B.D. Balart would recognize much of what occurs in a cupping today, just like we recognize in his detailed description of cupping procedures from 85 years ago the fundamentals of everything we do in the lab today.

The most significant advances over what B.D. was doing in his lab at Alexander-Balart in 1932 have to do with accuracy, control, and expanded vocabulary.

Bickford and Balart were both advocates of blind tasting, believing it impossible for cuppers to set-aside their bias and pre-conceptions if they knew what coffee they were tasting. They would no doubt be in favor of conditions in certified cupping labs today, such as black out capability and red lighting to masks any recognition related to color. But it is unlikely that Bickford and Balart demanded as much control of cupping environment as we do in certified labs today. Temperature, air movement, sound, and odor that interferes with evaluation (including roasting) can all be completely eliminated in certified labs during cupping so that full sensory attention is given to the coffee.

Two things Balart would recognize in the modern cupping lab are the scales and a grinder, though he might be more than impressed by the accuracy of each compared to the equipment he used. Balart simply noted that the scale “must be very accurate.” Today's scales can be accurate to 0.01 grams and compliant with American National Standard Institute requirements.  Our grinders can remain within a 10% difference in particle size between grinds of the same coffee. It is unlikely Balart’s grinder could achieve this level of consistency, but in his roasting plant the production grinders probably had an attachment you might not recognize, a powerful magnet to keep “wire nails, bolts, and other iron or steel objects from damaging the cutter parts.”

Probably the most foreign and “magic” instrument to Balart found in some labs today would be roast degree analyzers. In Balart’s day, there was no “cupping roast.” Each coffee was evaluated at its production roast level and at that time production roasts came in five levels of development: light, medium, dark, Italian and French.

The most basic components of a cupping lab have not changed since Balart’s time. His inventory listed, in part: 1 dozen cupping glasses, cups, or bowls; 1 dozen sample coffee trays; 1 dozen bullion spoons; 1 tea kettle. Although, we might be a little pickier about our spoons, which must be non-reactive metal and hold 0.135 to 0.169 ounces of coffee to meet Q Certification specifications.

Other things you might find in a modern cupping that you wouldn’t find in Balart’s lab include cupping forms, black grading mats, Le Nez du Café kits, an organic acids kit, various aroma and tasting vocabulary posters, and a water filtration systems.  Although you wouldn’t have found a defects kit or handbook in Balart’s lab, he did have a list of 20 defects which included the following three possibilities: small clod of dirt, medium clod of dirt, large clod of dirt.