Speaking of Coffee Prices - Thoughts for Roasters and Their Customers 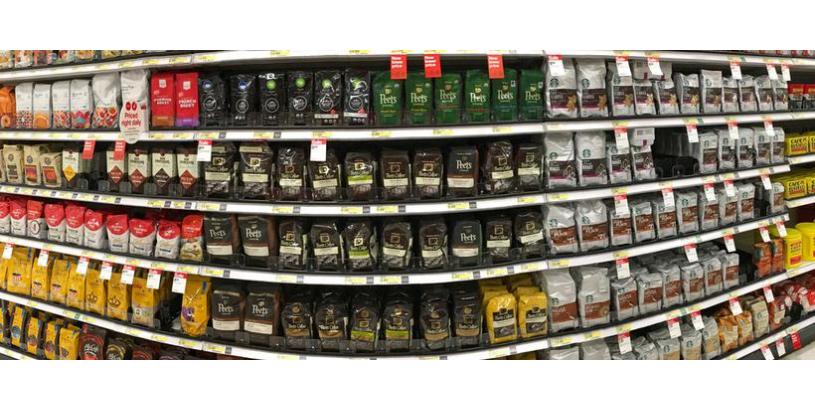 Speaking of Coffee Prices - Thoughts for Roasters and Their Customers

Looking for more read-alongs? Enjoy Extra Shot episodes of The Exchange coffee podcast, where Mike Ferguson recites some of his favorite coffee blogs.

In late 2010 the floor price for green arabica coffee began to move abruptly northward, jumping from $2.00 to $2.40 in six weeks. Prices plateaued briefly and then began a slow but relentless climb toward $3.00, a psychological barrier irrespective of inflation that has only been breached for a total of three days over the last 30 years (so far). Two of them occurred in 2011, on May 2nd and 3rd. Prices then dipped just below that mark and remained stalled in the neighborhood of $3.00. Most coffee roasters had been paying well above their budgeted costs for green coffee for months at that point, with no real relief in sight. Green coffee prices would not firm up below $2.50 until the fall of 2011 and would linger above $2.00, still outside the comfort zone for many roasters, for a few months into 2012.

In 2011 the reasons for high prices were somewhat unusually ambiguous. Usually, the whole thing starts with a brief but serious “weather event” in Brazil, followed sooner or later by a small harvest and/or the anticipation of a small harvest. The fundamentals of supply and demand (real or perceived … assuming such a distinction exists in economics) kick-in and prices go up.  But in 2010, Brazil actually had a bumper crop. The rest of the world? Not so much. There was too much rain in Indonesia and Central America and not enough rain in Africa. Colombia had an unusually low harvest. The volume of certified stocks—coffee on-hand—dwindled to another psychological barrier, a million bags. Without a highly visible and widely reported frost in Brazil to create anticipation of tight supply, the industry was a little slower to wake up and count the coffee.

At some point in 2011 coffee roasters were forced to consider raising their prices, perhaps more than once. Many went through obligatory attempts at cost cutting first, keeping busy while hoping for prices to come back down, only to discover in most cases that canceling travel plans and Friday donuts for the team didn’t really help. They had to raise prices. This isn’t even Business 101, it’s a prerequisite to Business 101. If you don’t understand that you need to raise prices when your costs increase, you will not be allowed to even take a seat and audit Business 101.

In 2011 I was working as Business Development Director for a good sized specialty coffee roaster. Like all coffee roasters in a highly competitive environment, we were reluctant to raise prices but eventually we did, and that meant deciding how and when to communicate with customers about prices. Talking to customers about price increases is not on anyone’s list of favorite things. Generally, the entire idea of communicating with customers about coffee prices is a neglected topic, especially given the dynamic and complex structure of pricing in an agricultural sector. The complexities underlying coffee prices, daunting even to the most experienced among us, are at the heart of the hesitation, I think, as if the difficult explanation rings false. It’s an old problem.

In the early 1950’s, Brazil experienced two significant frosts and green coffee prices peaked at the 2022 equivalent of $8.19 per pound in 1954. The retail price for a pound of roasted and ground coffee reached $1.45 (over $15.00 today). Congress held hearings and President Eisenhower ordered the Federal Trade Commission (FTC) to investigate. The FTC would eventually claim that the New York Coffee and Sugar Exchange was practicing restraint of trade and congress would attempt, and fail, to pass legislation establishing government control over coffee prices. It wasn’t the first time that high prices prompted intervention from the government nor was it the first time the government just didn’t get it. In 1954 both the senate hearings and the FTC investigation were characterized by a failure to understand not only how coffee pricing functioned but wider aspects of the coffee industry. For example, the FTC declared that Brazil’s claims of a diminished harvest due to frost were false because the FTC discovered the supposed small harvest was the same size as the previous year. Well, that was true because the FTC was comparing an on-cycle year to an off-cycle year. In other words, for an on-cycle harvest to be the same size as an off-cycle harvest was actually abnormal. The FTC had failed to absorb what most of us inside the coffee industry would consider basic knowledge. The harvest in Brazil alternates annually between a large crop and a not as large crop. To make matters worse, coffee industry professionals called to testify before congress struggled to explain with any clarity how supply chains and price discovery actually worked. 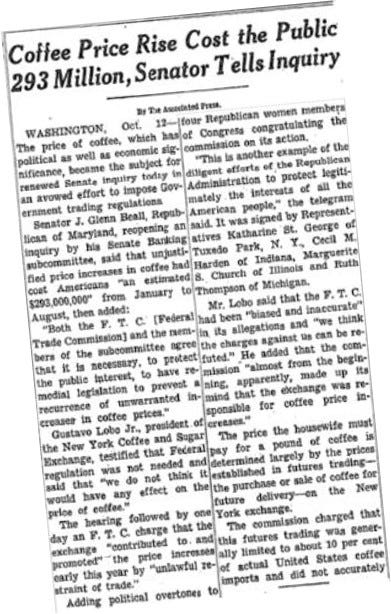 Point being, coffee supply and pricing are complicated. While we cannot be expected to explain all the complexities to wholesale customers (assuming we understand them ourselves), we do need to regularly communicate the idea that things are, in fact, complicated and that the potential consequences of this fact are always with us. So, a few fundamental truths to always be communicating:

When I say, “plan accordingly,” I am being only ever-so-slightly facetious, only ever-so-slightly literal, but 99% sincere. Yes, it’s difficult to create plans in an environment where uncertainty is not insignificant. And yes, even so, we should do what we can to proactively practice contingency planning and budgeting when we find prices favorable.  But mostly what I mean, beyond or before those things, is that everyone on the consumption-side of coffee, from importers to baristas, should understand supply to the extent that they can participate in managing the price expectations of customers, retailers for coffee drinkers, roasters for coffeehouses, and importers for roasters.

Just like I’m doing or attempting to do right here. Right. Now. My favorite example of this, as judged by how often I repeat it, is talking about (blogging about, reporting about, making YouTube videos about, tweeting about, Instagramming about, tik toking about, and asking your grandparents to Facebook about) how coffee belongs on the outside perimeter of the grocery store with meat, dairy and produce. Customers, wherever they are in the supply chain, should understand that coffee prices can and will fluctuate, entirely independent of inflation, and that there is a level of uncertainty inherent in the coffee industry and in being a coffee drinker. Coffee might be on the same aisle as Pop-Tarts® but in terms of pricing coffee has more in common with tomatoes.

If you started buying green coffee in 2015 when the c market obligingly remained below $1.50 and then proceeded to trend downward until it reached an average of $1.00 in 2019, there is no excuse for thinking those four years in any way defined reality or that those prices are sustainable, in any sense of the word, for anyone in coffee. There is no excuse for being surprised that green coffee now costs so much more than it did a year ago.

When the polymath Bertrand Russell declared that the demand for certainty is an intellectual vice, he was speaking of philosophical certainty (mostly, I think … though it’s hard to be certain) but the sentiment applies here. The expectation of certainty in coffee is a business mistake, so we should be talking about the fact of uncertainty regularly, especially when it’s sunny and warm and we, all of us, are tempted to not think about the fact that winter is coming. One characteristic of the specialty coffee industry is customer training and education. The fact that today’s price might not be tomorrow’s price should be incorporated into seed-to-cup sessions for wholesale accounts and online introductions to coffee for consumers.

When it’s Time to Talk, The Cat is on the Roof

The brother agreed and apologized.

"She's on the roof and won't come down."

There are those who believe in ripping off the band-aide, sending out an “effective immediately” price increase email or notes on the bottom of invoices. I’m not a fan. I think wholesale customers appreciate a little warning and while it is conceivable that telling them a price increase is imminent could send them shopping for another supplier, if that does happen your challenges are bigger than your prices. When your costs are rising and there is no apparent reason to believe the increases are acute, and increases are not the normal and incremental increases associated with inflation, tell your customers that you are planning to adjust prices. Hopefully, you’ve regularly communicated “some simple fundamental truths” about coffee to your customers so you can frame the pending price increases as something we all expect to happen at some point. A few things to consider in communicating about prices:

Coffee is a famously inelastic product. Not Dwayne Johnson famous, but famous like economist Alfred Marshall who developed an idea known as “the price elasticity of demand.” Generally—and  way too simplistically—the demand for coffee doesn’t easily shift based on price alone. Most coffee drinkers will drink the same amount of coffee when prices are high as they do when prices are lower. Historically, attempts at consumer boycotts due to high retail prices for coffee have not been widely adopted or sustained for a significant period of time.

However, unlike 1954 or 1977, today’s coffee drinkers have many more coffee choices. The availability of coffee qualities are deeply stratified relative to 40 or 70 years ago, as are accompanying prices. Theoretically there is a point at which prices could be so high that coffee drinkers will stop drinking coffee (or more likely, switch to tea or soda because caffeine is even more inelastic than coffee itself); but before we reach that theoretical tipping point, perhaps long before, coffee drinkers might switch to a less expensive coffee. After all, on the grocery store shelf the $4.00 a pound coffee is only a bended knee distance from the $14.00 for 12 ounces coffee. A consumer need not even descend that far to get back into their coffee budget range as there are prices everywhere in between. Many coffee drinkers self-identify as “duel drinkers,” meaning they’ll drink both specialty coffee and traditional coffee. As prices increase they might simply adjust the balance between the two. Coffee drinkers accustomed to drinking only high quality coffee may adjust by drinking more coffee at home and fewer coffee beverages prepared in a retail environment.

While this all may seem like I’m ending on a good news/bad news note, because I guess I am (consumers won’t drink less they might just compromise on quality) it might be helpful to take the long view and note that short term calls to boycott coffee due to high prices have never had a significant impact on consumption. On the other hand, decades of decreases in quality were extremely destructive to consumption. To the extent that overall coffee consumption in the US has stopped falling if not recovered, it is due in large part to the rise of specialty coffee. Coffee consumption’s greatest nemesis is not price, it’s bad coffee. And that, really, is the final and missing bullet point from the list above. As you communicate with wholesale accounts about coffee prices, never stop talking about quality.