Posted in: Culture, Collaboration
By Olam Specialty Coffee
More from this author

We are happy to welcome Juan Jose as a guest blogger for our second blog on Peru. Juan is the Content Manager for Olam coffee in Peru.

Peru is made up of a wide variety of landscapes, from long beaches to high mountains, from the desert to the largest rain forest. In the north, the second highest mountain rage, the Andes, goes through Cajamarca department and converges with the Amazon, creating complex and diverse orographies and microclimates. Cajamarca’s inter-Andean valleys have hosted coffee crops for more than 200 years and concentrate almost 43% of the total Peruvian coffee production, not only because of its vast lands but because of an ancient coffee tradition that goes back to the XVIII century, when the first coffee crops were brought in and started to be nurtured by the many generations of producers in the region. Coffee has been part of their lives for so long that their inhabitants’ experiences and learnings are inextricably linked to it, as explained by Julio Tantarico Gonzalez, a coffee producer in San Juan de la Montaña, one of the caseríos of Jaén district in Cajamarca, whose first memories are about learning to work with coffee:

Translation: “Before, there weren't nurseries, they brought some cuttings and grafts from other farms and we traced rows and put pegs for planting. I learnt with my grandparents; we have been in coffee since forever. It’s said that the Montenegro family brought coffee many years ago. That’s how the Typica coffee started here. That’s how coffee arrived.”

In fact, Typica variety is known as “Nacional” (“National” in English) by local producers, which is evidence of people’s attachment to it.

Don Julio’s lifelong training on coffee, as that of thousands of coffee producers in the zone, includes knowing precipitation patterns and harvest season, as well as contriving to get the best of their crops as weather becomes irregular. On his 14 hectares farm “El Limón”, named after the many lemon trees that thrive there, Don Julio has planted nearly 10 hectares of Bourbon and Catuai mixed with Pache and Tabi varieties, 2 hectares of forest and 2 recovered hectares with Catimor. San Juan de la Montaña, and Peru itself, is known for growing Arabica almost exlsuisvely, which nearly always results in specialty coffees. He separated Tabi and Catuai into differentiated plots, and he will progressively implement this throughout the entire farm now that he’s convinced of the added value of separating varieties for specialty coffee. 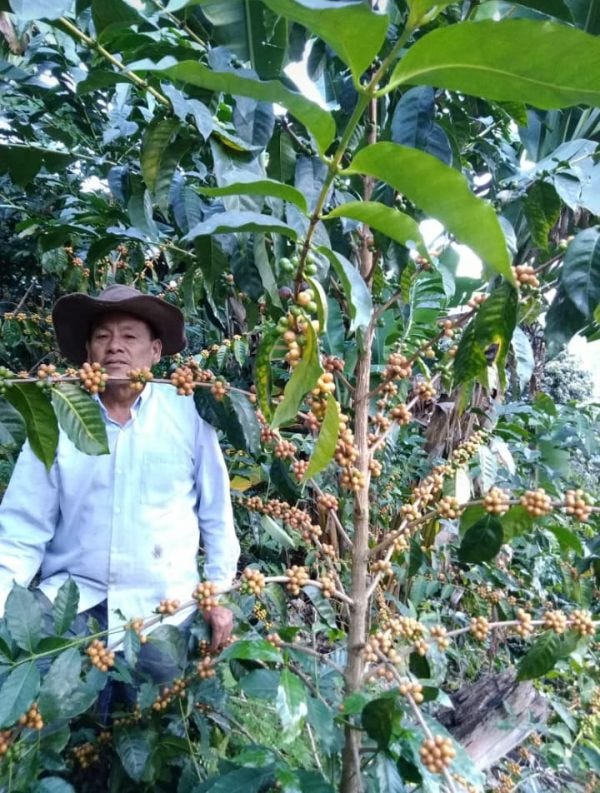 He started working this land 5 years ago, and it has become evident that his procedures and techniques are slightly different as he has gotten more information, implemented better agricultural practices and kept everything that was already beneficial and successful. Take fertilization as an example: his lands, already fertile and blessed with a fresh climate due to being 1630 m.a.s.l., are organically fertilized twice a year with potassium, coffee compost made out of coffee waste and “guano de isla”, seabirds' excrement used for generations due to its high nitrogen, phosphorus and potassium content. This highly valued product for ecological agriculture has been extensively used in this region and accounts, in part, for the country’s leadership as a supplier of organic coffee, and increases its potential for specialty grades. Don Julio holds an UTZ/Organic certification attributable to his sustainable agricultural practices, which have been historically implemented and, nowadays, enhanced by OLAM’s programs.

His manual pruning and cherry collection end up in a traditional washed process followed by a 15 to 18-hour fermentation and a sun-drying process which sometimes can be complicated due to climate irregularities and lack of appropriate infrastructure, such as raised beds. Today, in his facilities, he has 40 buckets on the side for anaerobic fermentation “experiments”, as he calls them. Don Julio decided to give it a try after OLAM’s technicians told him that he could improve his coffee’s flavor, which would translate into higher cupping scores and, therefore, better prices. He is carrying out these trials with an open mind and a critical approach. No one besides him knows best what is needed to make it more efficient in time and labor; perhaps bigger buckets, maybe more people. So far, his drive to experiment lies in the trust he has placed in OLAM’s experience and professional support, and he thinks it has paid off. 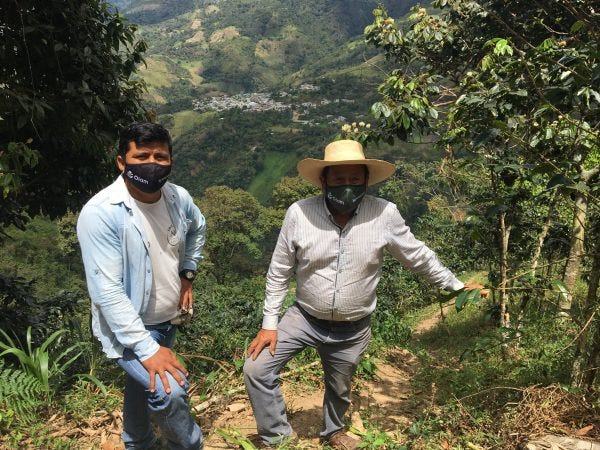 Olam’s technical agronomist with Julio Tantarico at his coffee farm

Don Julio, like hundreds of coffee producers in the region, values learning and improving not only for the financial yields, but because they know that land has to be continuously and creatively managed. Their region is already well positioned for quality in washed coffees, because it is up to 25% organic and grown between 1,000 and 1,800 m.a.s.l. Their ancient knowledge does not fight against improvements; to the contrary, they seem to know that “the only constant in life is change”, and so, they keep their ears open to small and meaningful changes at the farm and mill level. They have come to realize the worth of their coffee and its potential, with the recognition, prices and the pride that goes along with growing Specialty Coffees. Hence, they gladly accept any advice, and they are committed to continue making their farms more productive. Don Julio is proud to say that he is part of our program and sends a message to OLAM’s team:

“Keep training us in everything we are still missing. You are welcome."