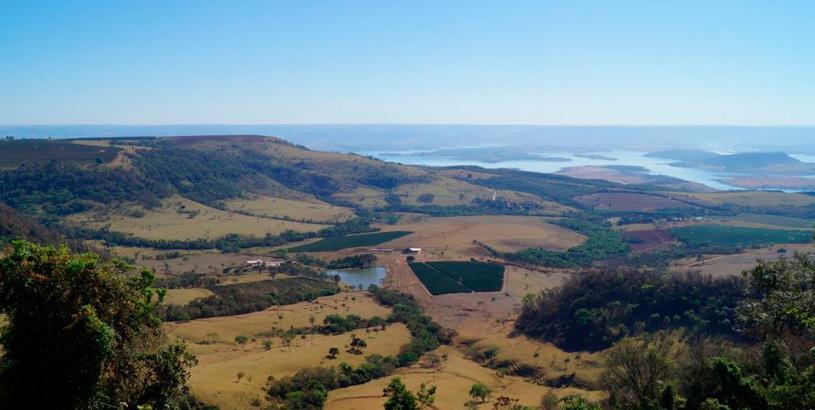 Olam Specialty Coffee has important collaborations in the Mogiana coffee region of São Paulo, Brazil - no thanks to Napoleon.

Coffee first came to northern Brazil early in the 18th century and slowly moved south as the commercial viability of coffee as a potential export crop increased. When Portuguese noble, Castro Mendonca, became governor (actually, “Captain General of the Captaincy”), of São Paulo in 1797, he gifted coffee seeds to his friends and political allies, the Prado family. These seeds were planted in gardens in the town of Jundiai and seeds from those trees became the first trees in Campinas, which would later become the center of the coffee industry in São Paulo.

1797 also marked the year Campinas was named and officially recognized as a town. Once a simple frontier outpost, the large region known as São Carlos had been transformed by sugar. International sugar prices reached record highs in 1796 and farmers began exercising political influence, which included Campinas being elevated to the status of a town as soon as they could demonstrate it was home to 61 “good men.” Thirty years later Campinas would no longer be a sugar town - it would be a coffee town -  and Brazil would be producing 30% of the world’s coffee. But first, Napoleon.

Napoleon’s Influence on the Coffee Trade

Two of the 61 good men whose presence allowed for the official recognition of Campinas as a municipality were Antonio Andrade and Francisco Camargo. Andrade was not only the first mayor of Campinas—the family name can still be found on roads in the city—but started a coffee plantation in the area some 10 years after seeds first arrived. Francisco Camargo (they’ve got roads too) started a plantation around the same time. That year, Napoleon made his first “visit” to Russia, a foray that led to a temporary peace between the French and … everybody. The coffee trees planted by Andrade and Camargo grew.

The timing appeared ideal. During the last half of the 18th century, 60% of European coffee came from Saint Dominque (Haiti). Following the slave revolt and independence, coffee production fell dramatically. Brazil was ideally suited to fill the void. Unfortunately, right around the time the first plantations in Campinas were beginning to bear fruit, Napoleon attacked Russia again and France was once again at war with - everybody.

During the Napoleonic wars, the British established a blockade. The price of coffee in France increased 197%. Demand plummeted and prices paid to farmers dropped below the cost of production. The nascent coffee farmers of Campinas went back to sugar. 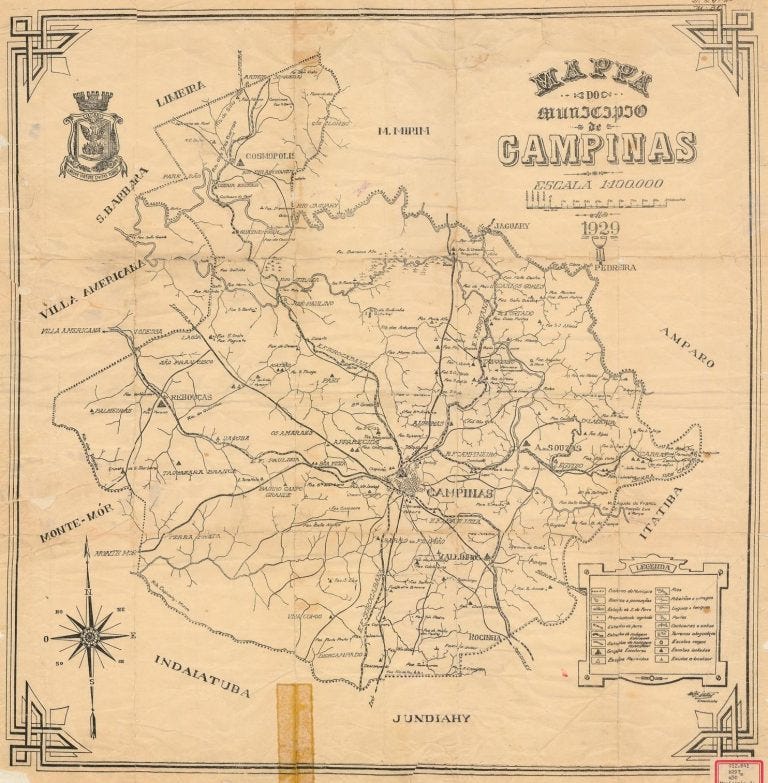 Although abandoned, the trees planted by Francisco Camargo remained. In 1817, his children restored the trees to cultivation and planted more. Coffee production in Haiti never rebounded but demand for coffee throughout Europe did return and demand in America was increasing rapidly. The Camargo family coffee plantation was successful as were new coffee plantations throughout São Paulo. Inspired by the Camargo family, coffee farms started appearing all around Campinas.

Seventy-five years after coffee seeds were first brought to São Paulo, some of the founding families of Campinas, such as the Prado family (remember, given seeds by the governor) and the Aranha family, were among the most prominent coffee farmers in the region. Many of the coffee farming families had become wealthy, but they were frustrated that 10% of their costs went to transporting coffee to the city of Santos.

In 1868, coffee farmers came together to fund construction of a small railroad to cover the short 25 miles from Campinas to Jundiai. From Jundiai the British owned  São Paulo Railway would then take coffee all the way to the port at Santos. But the coffee region was growing quickly and heading west as it did. In 1872, twenty-one coffee farming families funded the creation of a new and much more ambitious railway they named “Mogiana Railroad Company.” The new rail lines were put down heading northwest of Campinas and eventually reached all the way to Minas Gerais.

The fact that the São Paulo Railway was owned by British investors was typical of the government’s approach of relying on private development and ownership of railroads. This is why farmers in the regions west of Jundiai had to band together and build their own railway. Building a railroad not only made sense for getting coffee to the coast, but also for bringing immigrant labor inland following the abolition of slavery.

But privately owned railways throughout Brazil had little incentive beyond moving agricultural products from the interior to the coast. The needs of passengers were secondary to the needs of freight, so few railways were built moving north and south. Intersecting railways with different owners were sometimes run from different gauge tracks. But so important was the Mogiana Railroad to the coffee farmers of northwest São Paulo that the region itself came to be known as Mogiana. The railroad was not named for the region, the coffee region was named for the coffee railroad.

When construction began on the railroad in 1872, São Paulo was producing less than 20% of Brazil’s coffee. By 1890 São Paulo was producing 50% of Brazil’s coffee. When Brazil reached its peak in terms of market share, producing 80% of the world’s coffee in the 1920’s, half of that coffee was still being grown in São Paulo, which was the largest and richest coffee state in the country, and shipped out of Santos. Coffee production in São Paulo increased 40 times in 40 years.

Though Brazil is by far still the world’s largest coffee producing country, it never again saw the near functional monopoly of the 1920s and as exports declined and other regions in Brazil, Minas Gerais and then Espirito Santo, surpassed São Paulo, the Mogiana Railroad Company fell into debt and was taken over by the government in 1952.

Nonetheless, the name Mogiana remains synonymous with coffee and its rich history of entrepreneurial innovation that began with a few seeds planted 1787, the same year John Adams became the second president of the United States. By the time his son, John Quincy, became Secretary of State in 1817, there were coffee plantations in Campinas and for 100 years the coffees of São Paulo, shipped from the famed port of Santos, succeeded where Napoleon had failed, in conquering the world.