Kenyan Coffee, Gifts from the Owner of Snow 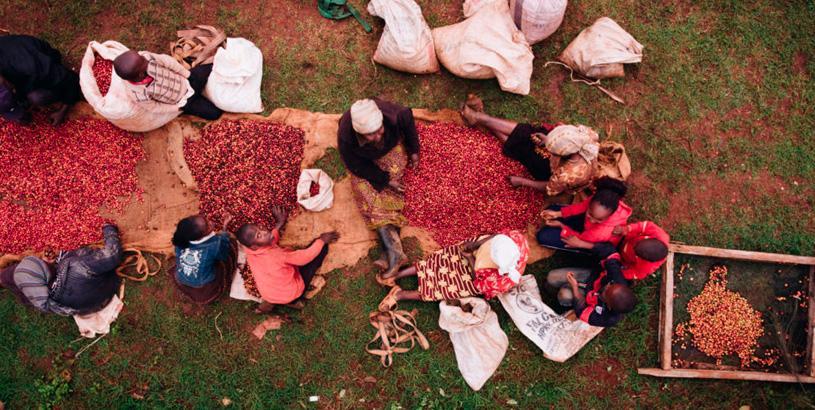 Kenyan Coffee, Gifts from the Owner of Snow

Mt. Kenya was a ghost ship on the horizon, its existence only rumored among Europeans for decades. Although it seems likely that the first “outsiders” to put eyes on the mountain would have been Arab traders, who caravanned through the interior for generations, it was a German adventurer/missionary named Johann Krapf who first told the world about it in 1849. Mountain spotting was something of a hobby for Krapf. A year before he had been the “first” to see and report Mt. Kilimanjaro along with fellow missionary Johannes Rebmann.

Incidentally, 1849 was the same year James A. Folger, age 14, set sail for San Francisco from Nantucket with his two older brothers.

Possibly equipped with a spyglass on an unusually clear day, Krapf spotted the peaks he would name Mt. Kenya from 100 miles away. Though rare today due to smog, the mountain can still be seen on occasion from Nairobi, 85 miles away. Krapf tried to spot Mt. Kenya again in 1851, travelling 40 miles closer, but the ghost ship did not appear.

For years, locals would assure travelers passing through the region that the mountain was out there, elusive and real, but it remained just a story. By the 1860’s, Kilimanjaro was being actively explored, but Europeans began to doubt Krapf’s account of seeing a second great mountain in Africa. How could such a mountain remain hidden? Finally, in 1883, a second sighting was reported. Joseph Thompson, a Scot, not only spotted the mountain, he attempted to explore it, but the locals basically told him to get off their lawn.

As soon as Europeans knew the mountain was there, they started trying to climb it, because it was there. QED. But climbing Mt. Kenya proved to be as elusive as finding it had been. Explorers did not reach the highest peaks until the turn of the century and it wasn’t until the late 1970’s that every route to every peak had been climbed.

We don’t know who was really the first human to see Mt. Kenya, of course. People have been living in the shadow of the mountain for thousands of years. One tradition holds that Gĩkũyũ, father of the Kikuyu people who have lived on the southwest slopes of the mountain for hundreds of years, was the first person to climb the mountain and speak to God. All of the people who have lived around Mt. Kenya for centuries share the tradition that it is God’s throne or home on earth. The Embu people, who have long lived on the southeastern slopes and always built their homes with the door facing the peaks, call God on the mountain “the owner of snow.” 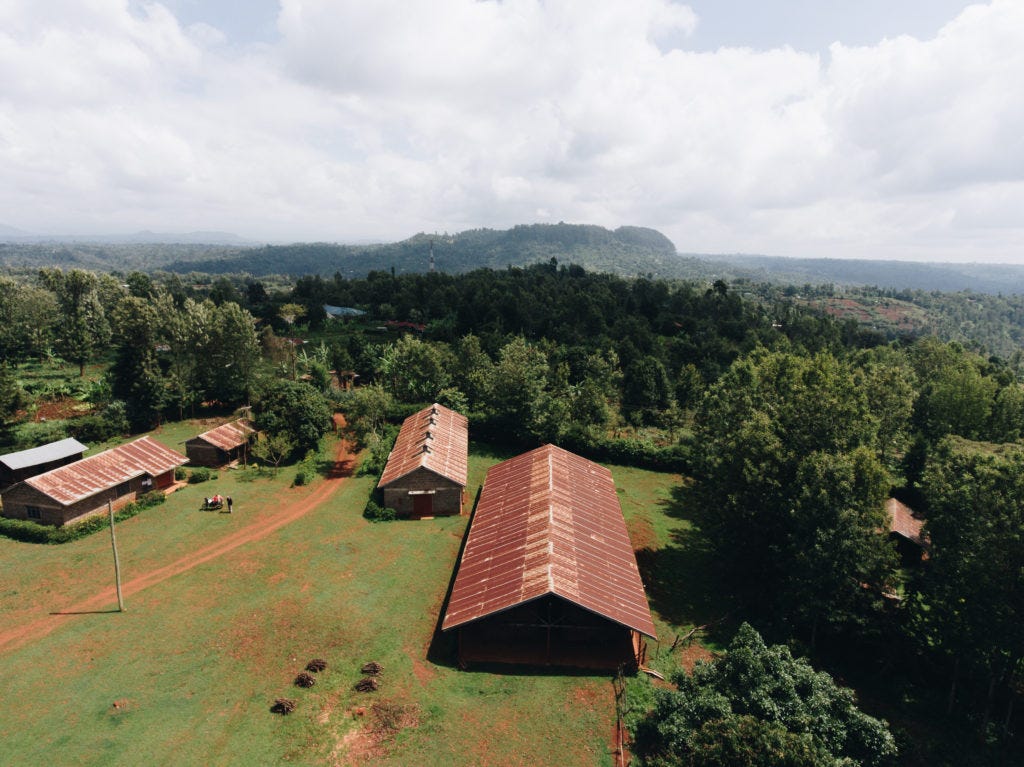 There are some accounts of coffee being grown in Kenya prior to British colonization, but if true these would have been small garden plantings for home use and trading locally. In the 1922 edition of All About Coffee, William Ukers quotes a British official noting that coffee grows wild in Kenya, so perhaps the wild coffee of Ethiopia had southern cousins.  When Francis Thurber published Coffee, Plantation to Cup in in 1884, Kenyan coffee was not mentioned once. Indeed, the entire production of all of Africa is said by Thurber at that time to be commercially inconsequential.

Just a few hundred miles north of Mt. Kenya, coffee had most certainly been growing wild for as long as anyone could remember, long before anyone figured out how to chew it or brew it. And yet when formal coffee cultivation arrived in Kenya, seeds had to be brought in and planted. The British took control of Kenya in 1895. In 1896 French Catholic missionaries planted coffee in the hills northwest of Mombasa. Scottish Protestant missionaries planted coffee outside Nairobi.

Incidentally, 1896 is the year natural gas was first used to roast coffee in the United States.

Kenyan coffee thrived in the rich volcanic soil of the Rift Valley and coffee plantings quickly moved north from Nairobi and toward Mt. Kenya. British military veterans were offered 1,000 acres of land for free if they had at least £1,000 in assets. Serious commercial cultivation began in 1900 and by 1914, 6,000 acres were producing coffee. By 1934 this had grown to 102,000 acres. This was three years after Karen Blixens got Out of Africa.

The Kenyan coffee farm of Karen Blixens, A.K.A. Isak Dinesen, A.K.A. Merle Streep, was southwest of Nairobi (where there is now a town named Karen) on land that was not rich volcanic soil, which probably explains why the plantation eventually failed due to poor yields. Blixens’ eighteen years in Kenya, especially the first years when there were relatively few colonists, were perhaps a rare moment in time when her reflections on contrast had more meaning because the balance between the invader and the invaded held some real and sincere (if overly romanticized) mutual dependence.

Blixens was viewed with suspicion by other colonists for her admiration of the Kenyan people. She made the observation that while “I should never quite know or understand them, they knew me through and through.” Her empathy excuses nothing but it does remind us that the distance between those who pick coffee and those who roast coffee can be measured in more ways than miles.

Unfortunately, among all the unfortunate things related to colonization, for the first 60 years that coffee was grown commercially in Kenya, only white people were allowed to own coffee farms, leaving Kenyans to perform the labor, and the British plantation owners, exceptions noted, did not grow wealthy by treating their workers well.

Because Kenya had been subjected to practical if not formal occupation by various powers for hundreds of years, the country had never developed a sense of national identity. Communities in the interior were largely defined by tribe and had no sense of national boarders let alone identity. What resistance to the British occurred near the end of the 19th century was always resistance from one tribe of people protecting their land. At the same time, the coast had been an epicenter of international trade for so long, since perhaps the first century, it had evolved into a multi-cultural mix of people and religions from all over the world who had in common only that they wanted to do business … and avoid the interior. So it took years for even non-violent resistance on anything approaching a national level to take shape among the Kenyan people.

The British followed the colonization script and immediately built a railroad, the Uganda Railway, that connected Mombasa to Uganda. When Karen Blixens left her beloved Kenya, she began her journey on the Uganda Railway. This was the railway whose construction was delayed by the man eating lions of Tsavo; but as everyone knows, Val Kilmer killed the lions and the railway was completed in 1903.

Incidentally, 1903 is the year John Arbuckle received a patent for a fan device that would force hot air to circulate more efficiently inside a coffee roaster.

While the British coffee farmers and business-minded cosmopolitan coast thrived, Kenyans began slowly to test their voice, organize, and demand their seat at the table. Still, it wasn’t until 1944 that an African was given even a token role in the political process. One of the leaders advocating for Kenyan participation and representation in government was Henry Thuku, one of the first Kenyans to be granted a license to grow coffee, and in 1959 the first African to hold a seat on the board of the Kenya Planters Coffee Union. 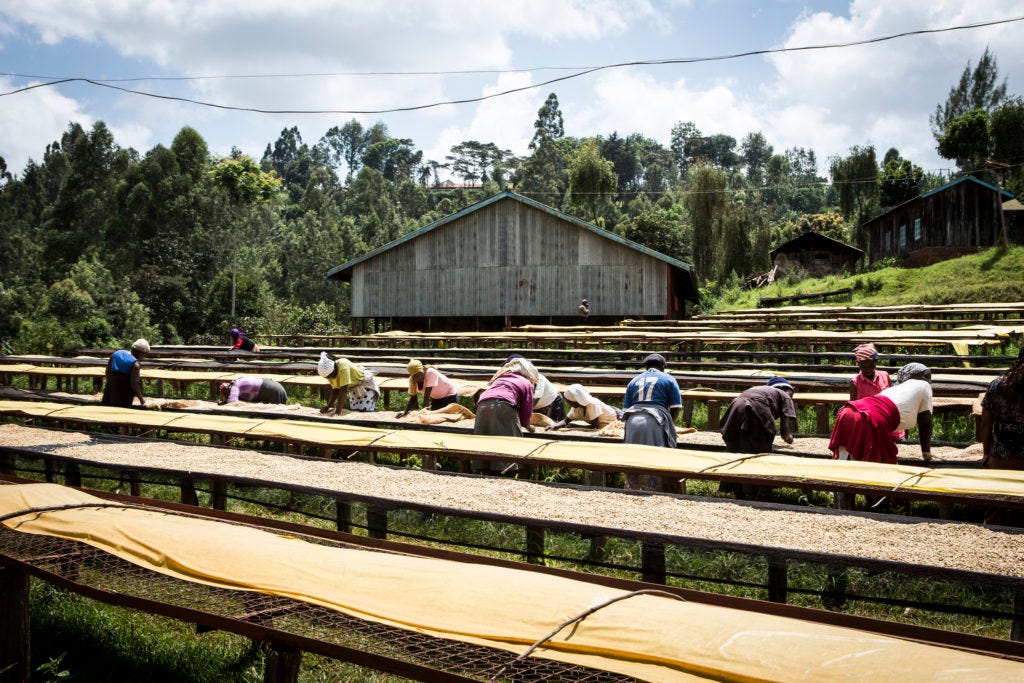 As they had in India, the British focused on developing large coffee plantations complete with washing stations. But nearly as soon as they were allowed to grow coffee, the small-holder African coffee farmers began to form cooperatives. Kenya gained formal independence in 1964 and throughout the 1960’s, nearly every issue of The Kenyan Gazette—a monthly newspaper publishing government news and notices—announced the formation of yet another coffee growers cooperative.

For the British plantation owners, growing coffee in Africa was almost something of a lifestyle choice. For the Kenyan people who had done all the work and had all the skills, growing coffee represented a true economic opportunity and the number of people growing coffee exploded. Today, two-thirds of Kenyan coffee land is small-holder farmers. Virtually all Kenyan coffee produced for export is washed.

Mt. Kenya, which remained unknown to outsiders for so long, provides ideal conditions for growing coffee, the right altitudes, weather, access to water, and soil that drains easily; gifts, perhaps, from the owner of snow.