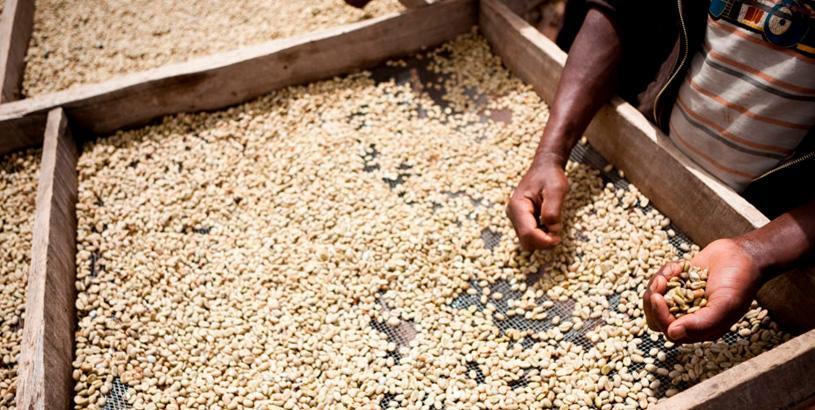 History Featured
Posted in: History
By Mike Ferguson
More from this author

When it comes to Ethiopian coffee, history tells a unique and exciting story. Even when you separate Ethiopia from coffee, the facts, and the lore, and the country remains one of the most fascinating regions in the world. Ethiopia is home to the oldest evidence for humankind, one of the oldest alphabets in the world still in use, and one of the oldest Christian churches in the world. Christianity arrived in Ethiopia at roughly the same time as Emperor Constantine’s conversion, and Ethiopian Orthodox Christianity is, arguably, as old as Roman Catholicism. Some people might believe that the first Indiana Jones should have included a visit to the Ethiopian city of Axum. Other than a brief “visit” by Italians in the 1930s, Ethiopia was never colonized. It’s an interesting place even before we broach the topic of coffee.

Though we consider the coffee origin story of a goatherd named Kaldi and his frolicking goats a myth (the French version says they were “prancing,” and even “executing lively pirouettes”), this story of how coffee was discovered has persisted for centuries. Different versions of the story usually part ways when detailing what Kaldi did after discovering the effects of eating the coffee cherries. Most stories include the discovery being passed to monks, usually but not always Christian, who used the coffee to remain awake during religious devotions. In some versions, a monk is passing by while Kaldi is dancing with his goats. Other times, Kaldi goes home and his wife tells him to take the cherries to a nearby monastery.  What nearly every story of Kaldi and his goats have in common is the location: Ethiopia, or Abyssinia.

Just twenty years after Constantine declared Christianity a legal religion in the Roman empire and nearly 70 years before the New Testament was ratified at Carthage, Abyssinia declared Christianity the state religion. A group of monks known as the “Nine Saints,” fleeing the persecution of those who did not agree with Pope Leo, began establishing monasteries in the northern region of the country in the late 5th century. Their disciples, a group named the “Seven Stars,” continued this work, and eventually, several monasteries were established on and around Lake Tana. In one version of the Kaldi story, he takes the coffee cherries to a monastery at Lake Tana. Today, there are seven monasteries on the lake’s southern peninsula, where coffee still grows wild and is still harvested. Lake Tana is not short on legends either: It is said that the Ark of the Covenant was hidden for a thousand years on Kirkos Islands on Lake Tana before being moved to Saint Mary’s of Zion in Axum around 400 AD.

So, what’s the truth behind Ethiopian coffee history?Whether or not we believe there are kernels of truth in the legend of Kaldi and other stories about how coffee brewing was born, with archangels, whirling dervishes, and ghosts, there is a virtual certainty that the coffee plant originated in Ethiopia. It seems fitting, if not poetic, that the region might be the birthplace of both coffee and humankind; although, it should be noted that other places lay claim to the origin designation — Yemen for coffee and South Africa for humans.

Coffee is ancient in Ethiopia but coffee farming is not. If the story of Kaldi is true, most writers indicate he would have boogied with his goats in the 8th or 9th century, but this is difficult to reconcile with the establishment of monasteries in regions where wild coffee was plentiful.  In any case, by the end of the 9th century, coffee was actively being cultivated in Ethiopia as food, but not as a beverage. This is largely an educated guess by those who are educated and guess at such things. It was the Arab world that developed brewing, in most stories, through a series of accidents. The coffee is accidentally roasted, accidentally ground, and accidentally put in water. By the time Constantinople fell to the Ottomans in 1453, the good news was, they brought coffee.

Even as coffee became an export for Ethiopia, it was the result of gathering rather than agricultural practices. A hundred years ago, plantations, mostly in Harar, were still the exception, while “Kaffa” coffee from the southwest was still harvested wild. In 1935, William Ukers wrote:

After causing us all to have dreams about endless forests of wild Ethiopian coffee, history (at least from Ukers’ perspective) paints a slightly less glamorous portrait of the coffee that may never have been seen by a human, let alone roasted and brewed, Ukers goes on to describe the processing method for this coffee: “It is shelled where it is found, in the most primitive fashion, and goes out in dirty, mixed condition.”

Ethiopia had fought fiercely and successfully to remain independent of European occupation, a fact rightly celebrated by all of Africa. Unlike coffee regions that had suffered colonization, Ethiopia had been introduced to very little in the way of processing infrastructure. When Ukers wrote about the “immense” coffee forests, there was almost no machine milling anywhere in Ethiopia, and certainly not in the southwest. Ethiopia’s reputation for wild, naturally processed coffee, often fermented and sour, would persist for decades. The government began attempting to improve quality in the 1950s, with mixed results. And although Ethiopia had never been colonized, it was not immune to the political instability that swept the continent as others gained independence. Nearly 20 years of totalitarian communist rule virtually eliminated previous attempts by the government to improve quality.

When Ethiopia emerged from the dark days of dictatorship in 1991, the specialty coffee industry was approaching the “boom years,” when the number of coffeehouses would double every two years. But Ethiopia had seen virtually no improvement in processing for fifty years. Importers and green coffee buyers had to be vigilant and often searched long and hard to find Ethiopian coffees that could be sold as specialty coffee. This scarcity, and the uniqueness of quality coffee when found, made Ethiopian specialty coffee relatively expensive.

Over the last ten years, the production of Ethiopian coffee has increased by 37%, and Reuters reported that Ethiopia is on track to export a record-high of four million 60kg bags of coffee into 2020. Over that time, quality has improved on two tracks: Some natural process producers have discovered the art of dry-milling, capturing the desirable qualities while avoiding the undesirable; and there has been an increase in washing stations and therefore an increase in washed coffee.

A Taste of Ethiopian Coffee

Today, Ethiopian coffee is known for its distinct flavors, with many varieties featuring an enjoyable combination of chocolate, citrus, berries, and other bright tasting notes. The aroma is often dramatically floral or fruity, especially among the naturally processed coffees. Ethiopian coffee is graded G1-G9, with specialty coffee being found in G1 through G3. All Ethiopian coffee is Arabica, and at least 150 varieties are commercially cultivated.

Olam is celebrating both washed and naturally processed Ethiopian coffee this month as there are still plentiful lots available. Coffees from our favorite estates and washing stations in Limmu, Sidamo, and Yirgacheffe are available on both coasts. These coffees exhibit the bright citrus of washed coffee while retaining notes of stone fruit, apricot, plum and peach.

Download Our Harvest and Shipping Calendar to Plan Your Ethiopian Coffee Offerings!

Looking to experience the rich flavors of Ethiopian coffee for yourself? Shop our curated selection of organic and fair-trade beans at Olam Coffee.

Editors Note: This post was originally posted in March 2017 and has been updated as of February 2021.