On Folger’s Shoulders: Lessons from the Early Years of a Coffee Giant 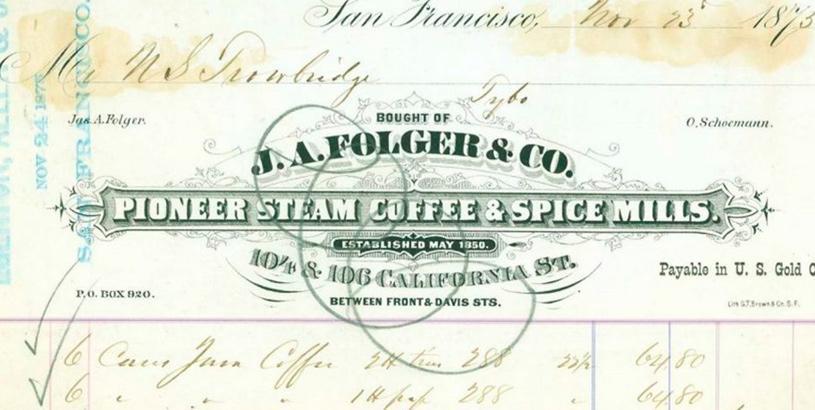 On Folger’s Shoulders: Lessons from the Early Years of a Coffee Giant

They have something better than royal blood there. The grandmother of Benjamin Franklin was Mary Morrel—afterward, by marriage, Mary Folger, one of the old settlers of Nantucket, and the ancestress to a long line of Folgers and harpooners—all kith and kin to noble Benjamin—this day darting the barbed iron from one side of the world to the other. - Herman Melville, Moby Dick, 1851

It’s easy, or tempting - or easy and tempting to imagine we have been cutting totally new pathways and pioneering trails for the last four decades as the specialty coffee industry in the United States and around the world. And we have, here and there, been creating new things, or mixing old things together in such a way that they became new things almost entirely. But … well, not so much as we might imagine. Yes, in important ways, particularly at retail and specifically within the role of the barista and their ambassadorship with consumers, and in our focus on farms and farmers and sustainability, the specialty coffee segment has brought new and unprecedented life to coffee as an industry. Nevertheless, we stand on plenty of shoulders, as the bromide goes. It can be encouraging to be reminded that even what we might consider “coffee empires” were founded on struggle—even  failure—and hard work.

A few years ago, The Folger Coffee Company launched a new coffee brand named “1850” to celebrate the arrival of its founder, James Athearn (“JA”) Folger in San Francisco. The year 1850 also marks the founding of a company that would one day become Folgers Coffee History states that James sailed with his brothers, Henry and Edward, from Nantucket to Panama in 1849, heading for the gold rush in California. From Panama to California they sailed on the Isthmus, a ship from the Pacific Mail Steamships line, a company which, 65 years later, would bring coffees to San Francisco from Central America that would have gone to Europe before WWI, helping Folger, Hills Bros., and MJB introduce new quality and flavor profiles to Americans.

There are a few different versions floating around about what happened when the Folger brothers arrived in San Francisco in the spring of 1850 (and even about the following 20 years). We assume that James and his brother, Henry, are likely the James and Henry Folger listed in an 1850 San Francisco directory as living at Pacific and Powell, an intersection that still exists. In the directory, James is listed as being a “mason.” James had learned carpentry while helping rebuild his father’s business after a fire on Nantucket, and his first job in California, at age 14, was to help William H. Bovee build a coffee plant, which was named “Pioneer Steam Coffee and Spice Mill,” but had no steam-run anything, despite the name. The roasters were cranked by hand. 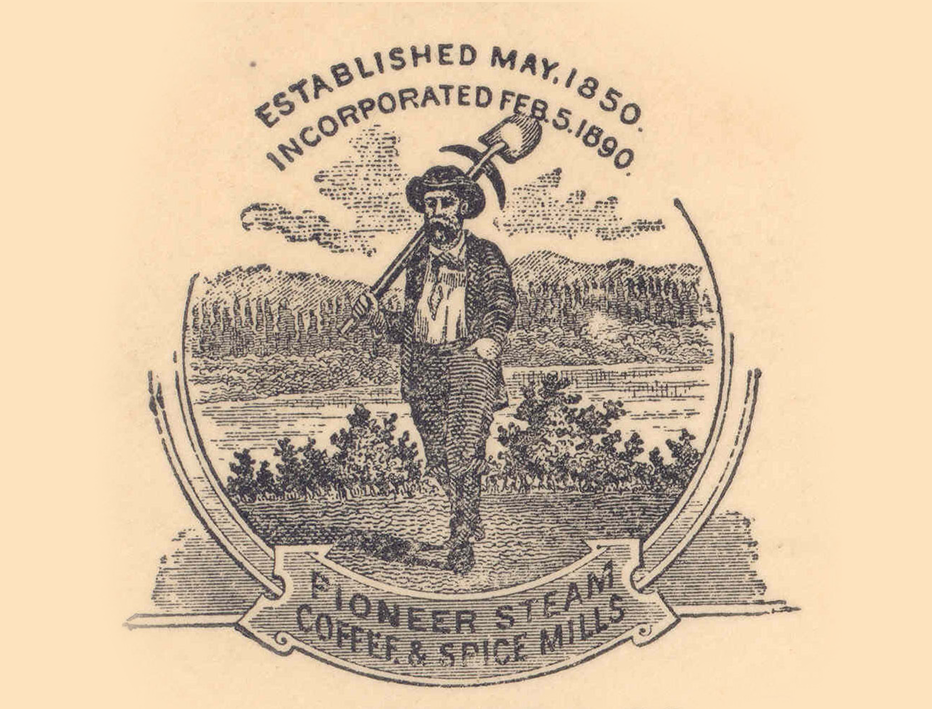 Henry and Edward headed inland to find gold. JA remained in San Francisco where his job with Bovee became a permanent position once the building was complete. Pioneer Steam was the first commercial coffee roaster in San Francisco. A guy by the name of Domenico Ghirardelli made an attempt at coffee, but failed. Don't feel bad for him. He later did much better with chocolate. Roasted coffee sold well to miners who apparently did not want to roast their own coffee, which was common in most households at the time.

After two years, Henry and Edward had returned without finding much gold. JA, now all of 16 years old, decided it was his turn, but he wasn’t only intent on mining for gold. He brought coffee and spices with him to sell in the mining camps, and was soon requesting more from Bovee. He used his profits and a little success in finding gold to open a store in a large mining camp called Yankee Jim’s (a camp named after an Australian horse thief, which is now a small town in the Sierra Nevada foothills … population 18). Note, sometimes the story is told that JA named his store “Yankee Jim’s," but rest assured, that was the name of the camp, not the store.

When JA was 18 years old, he sold his store, returned to San Francisco, and resumed employment as a clerk and salesman with Pioneer Steam Coffee and Spice Mill. Author Mark Pendergrast, in his book Uncommon Grounds, tells of a miner writing in his journal that Jim Folger was selling coffee to “every damned digging in California.” At this time, the company may have been co-owned between Bovee and Ira Marden, and did finally have a steam engine. Well, some versions have it that way. Some versions have it that JA and Marden bought out Bovee together at the same time and this was Marden's first involvement in the business.

In any case, by 1859, nine years after his arrival in San Francisco, 24-year-old JA Folger was a partner in the coffee roasting business started by Bovee. Although Folgers and the other San Francisco roasters would prosper due to WWI disrupting green coffee shipments to Europe, the Civil War was a different story. Folger and Marden declared bankruptcy in 1865. JA managed to buy Marden’s share of the company and then proceeded to spend many years paying off every penny of debt, surprising some of his creditors who had long given up on receiving payment.

One of the hardest parts of the Folger story to nail down is when the company became known simply as JA Folger & Co. If we take all the stories and documents together, the timeline might be something like this:

1865-1878-JA Folger & Company / Pioneer Steam Coffee & Spice Mill (the company continued using Pioneer Steam as part of its corporate identity, apart from its name, until at least 1897, as depicted in the image above)

Some versions of the story include a timeline that Proctor & Gamble summarized in papers related to the sale of Folgers to JM Smucker in 2008, indicating JA had no ownership interest until 1865, but it appears whoever prepared these papers was relying on an erroneous Wikipedia entry. 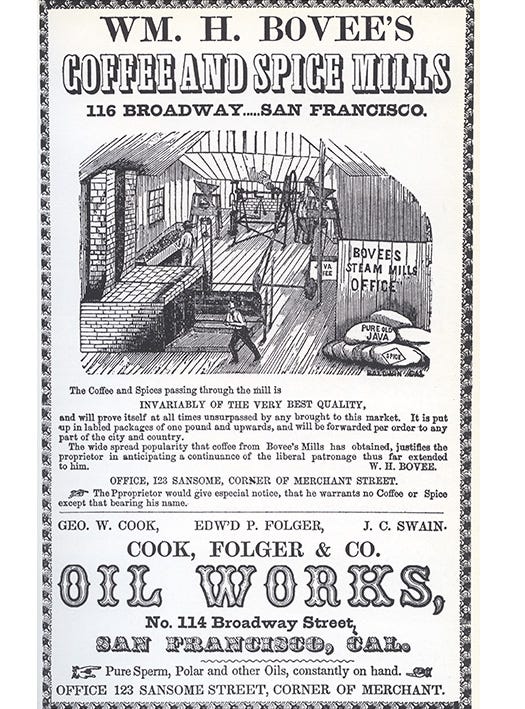 An 1852 ad for William Bovee’s coffee and spice mill, where James Folgers gets his first job in San Francisco. His brother, Edward, went into the whale oil business right next door. Credit: Folgers.com

There’s no doubt that JA Folger had a heart for sales and it was largely through his tenacity and exuberance as a salesperson that the company grew in the early years before he bought an interest. He built and then sold a successful independent retail operation at Yankee Jim's mining camp, and then traveled throughout gold country selling coffee on behalf of Pioneer Steam Coffee. As his company grew, he dispatched salespeople throughout the west, going head-to-head and often winning against the east coast coffee giant, Arbuckle’s.

There are some indications that one of JA’s responsibilities in the early days of Pioneer Steam Coffee was bookkeeping, and it is clear that he ran a tight ship once he had full control of the business. It was his business acumen (and surely his salesmanship too) that attracted an outside investment of $10,000 even as he was emerging from bankruptcy. That’s $150,000 today. The bankruptcy was due to a post-war collapse in the economy and a general disruption to business during the war, but JA carefully plotted out a reasonable and responsible financial path forward. A decade later he was still paying off creditors when a government inspector, reviewing results of the bankruptcy, reported being impressed, not only with the progress in paying down debt, but also with the company being so well run.

While there is almost no information to help us understand the quality of coffee in the early years of Pioneer Steam and JA Folger & Co., we do know that as methods for judging the quality of coffee evolved throughout the industry, Folger was an early adopter of these methods. Cupping (or “Cup Testing”) was largely developed—perhaps arguably—in San Francisco.  JA Folger implemented cup testing as a quality control method because he recognized quality as a differentiating factor in what had become a highly competitive region, and because it made better business sense to pay for coffee based on taste rather than the size of beans, as was the previous practice.

Although it took a dozen years or more, JA Folger, in a very disciplined and deliberate manner, paid all his creditors after bankruptcy. Although he did not bear sole responsibility for the debt, he assumed sole responsibility when he took control of the company and was so persistent in addressing his debts, according to Pendergrast, one of his creditors wrote on a receipt, “This payment being unexpected, I hereby gratefully acknowledge the honorable transaction of a noble merchant.” It is said that JA once wrote in a letter to his son, "money-making was always secondary to a good reputation."

Remain focused on sales, be disciplined with the numbers, remain committed to quality, and don’t compromise your integrity. Any coffee roaster, whether in their first year or fifth decade, can learn from Folgers coffee history and will be well served by following in the footsteps of a young James Athearn Folger.