The store will not work correctly in the case when cookies are disabled.
C-Market: $2.16 USD 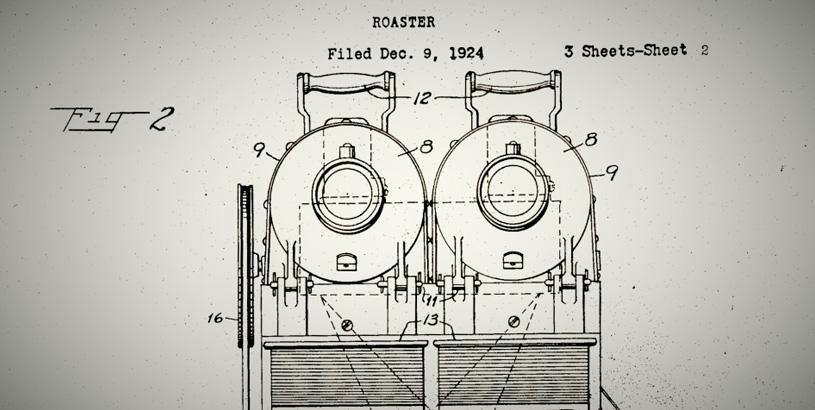 The mechanically minded Jabez Burns arrived in America from Scotland, where he had spent some time selling coffee door-to-door, in 1844 at age 18. He was soon married and trying to earn a living, but like a tinkerer straight out of central casting in Hollywood, Burns had many day jobs as he tried to invent a better mouse-trap. He did sell some patents, and even made decent money with one, an adding machine dubbed the “Burns Addometer,” which holds a place in the history of computing. 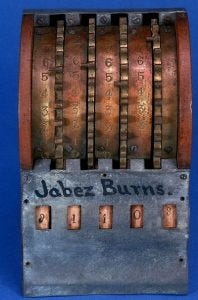 His day jobs eventually led him back to the familiar ground of coffee, where he didn’t excel at any particular position, but became something of a jack of all coffee trades. So it was that his better mouse-trap would be a better coffee roaster. Today, we take it for granted that when we open the drum door of the coffee roaster the coffee is going to spill out into the cooling tray. But before Burns invented his self-emptying coffee roaster, the drum—or sometimes a ball or pan in those days—had to be removed from the heat source and then dumped. This virtually ensured that the beans at the bottom would have burn spots. In those days they called this "tipping" only when the tips of the beans burned. When the sides of the beans had scorch marks they called it "kissing the cheeks." Burns’ design was revolutionary enough that Scientific American wrote an article about it in 1864, the year the patent was granted, and Burns started his company, Jabez Burns & Sons. 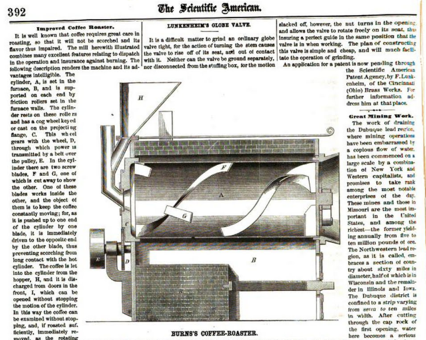 At the time, including “Sons” in the name of his company was anticipatory if not aspirational. Although Burns did have five sons at the time, they were ages 1-15. Eventually, the Burns family would include seven sons. Those who would be most involved in the coffee business were William, Robert, Jabez Jr., and A.L. Burns. Born within weeks of the one-year anniversary of President Lincoln’s assassination, A.L.’s full name was Abraham Lincoln Burns, but he went by “A.L.”  (He had a younger brother named George Washington Burns.)

In 1878, Jabez Sr. started a magazine called “Spice Mill” aimed at the coffee and spice trades, and for decades it was the most popular magazine in the coffee industry, until Tea & Coffee Trade Journal, established in 1901, eventually succeeded it. Jabez Sr. died in 1888 and at least two of his sons, Robert and Jabez, took senior positions in running the company. A.L., just one year out of Columbia University where he received a degree in engineering, took over as editor of the Spice Mill. But before he died, Jabez Sr. and all seven of his sons shared an interest outside of coffee. They formed the Burns Amateur Brass Band. 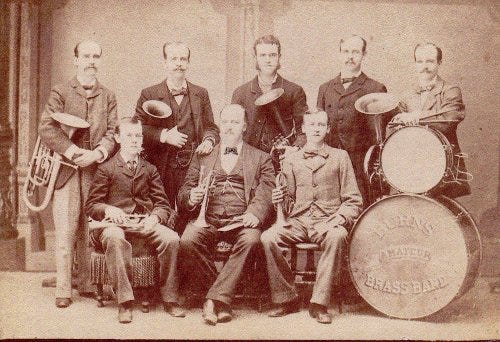 Jabez Burns & Sons experienced significant success with the Burns Roaster. One of their first customers was another new company, Arbuckle Brothers. But it was the new century that brought a parade of  patents, including the evolution of the now-iconic barrel sample roaster. 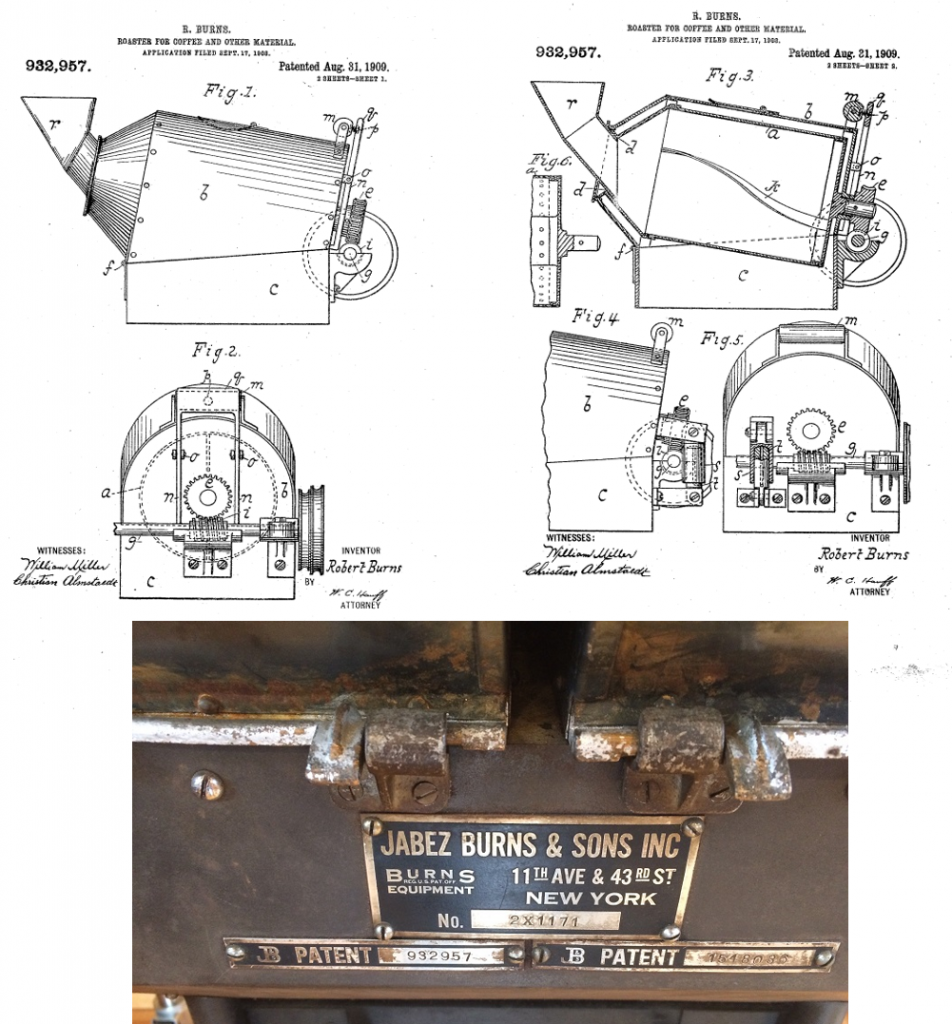 Patent for original version of the "Roaster for Coffee and Other Material," some of which survive, from 1909. The photo (by "topher") of a barrel roaster with the 1909 patent number was posted for sale on coffeeforum.com in 2017. Drawing from US Patent Office archive. 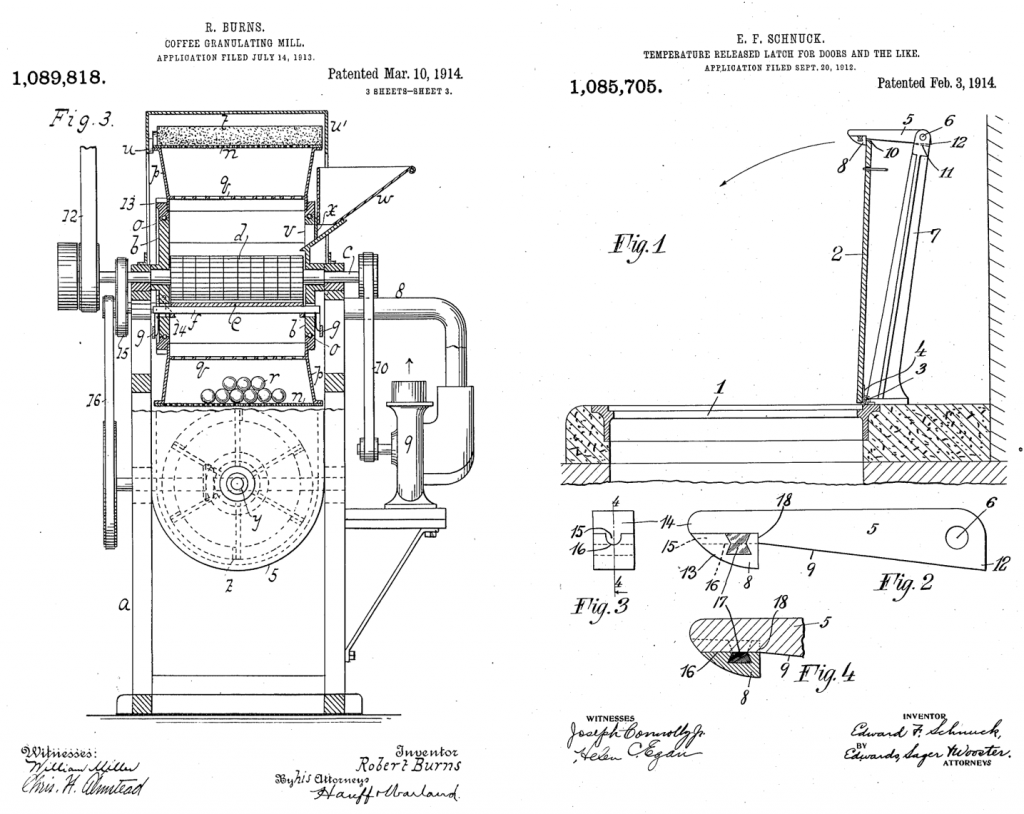 When William Ukers published his book, All About Coffee, in 1922, he invited A.L. Burns to serve as a contributing editor and acknowledged him in the preface as having provided corrections, revisions, and content for six different chapters. Ukers had served as editor of Spice Mill for a few years just before A.L. assumed the job and the two men undoubtedly had at least a business friendship. In the chapter on coffee roasting, Ukers quotes A.L. at length on the topic of "Roasting Coffee Efficiently." Though lengthy, it is worth quoting below in its entirety because it serves as a reminder of how timeless some truths about roasting coffee are and that much of what the specialty coffee industry has been about over the last 30 years is re-introducing ideas that were "misplaced" over the relatively short amount of time that a handful of importer/roasters dominated the market.

Burns somewhat famously merged with Probat in 1997 to form "Probat/Burns," but a few years ago Probat re-introduced "Jabez Burns" as it's own independent American based brand and the company manufactures a production roaster that harkens back to the early days, including a square hopper and the familiar, molded, "JB" logo. 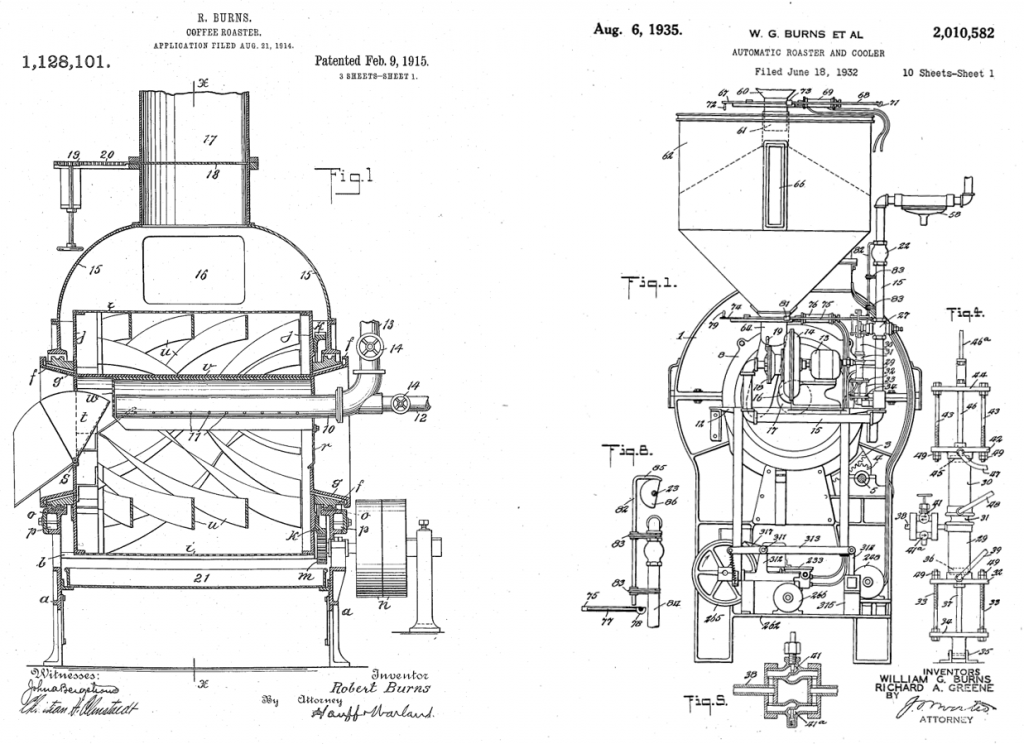 Then and now. The JB logo as it appeared on barrel roaster 100 years ago (left, photo by giuffria654 on eBay) and as it appears on present day production roasters manufactured by Jabez Burns (photo from Jabez Burns jabezburns.com).

Roasting coffee is not so difficult a matter as is often claimed by operators and "experts" who seek thus to magnify their importance; but it is nevertheless a process about which a great deal may be learned in the school of practical experience. With one of our modern machines anybody with ordinary intelligence and nerve can take off a roast after one trial which would pass muster in many establishments, but that same person applying himself to the roasting job for a week will either be turning out vastly better roasts or will have demonstrated that he never can excel as a roasterman.

Modern coffee roasting machines provide for easy control of the heat (from coal, coke, or gas fuel), for constantly mixing the coffee in such a manner that the heat is transmitted uniformly to the entire batch, for carrying away all steam and smoke rapidly, for easy testing of the progress of the roast, and for immediate discharge when desired. The operator's problem therefore is the regulation of the heat and deciding just when the desired roasting has been accomplished.

If all coffees were alike, roasting would soon be almost automatic. In some plants most of the work is on one uniform grade or blend. But coffees which vary greatly in moisture-content, in flinty or spongy nature, and in various other characteristics, will puzzle the operator until he establishes a personal acquaintance with them in various combinations in repeated roasting operations. The roasterman therefore must be able to observe closely, to draw sensible conclusions, and to remember what he learns. Roasting coffee is work of a sort which anybody can do, which a few people can do really well, and no one so well but that further improvement is possible.

There is no absolute standard of what the best roasting results are. Some dealers want the coffee beans swelled up to the bursting point, while others would object to so showy a development. Some care nothing at all about appearance as compared with cup value, while others insist on a bright style even at some sacrifice of quality. Business judgment must decide what goods can be sold most profitably.

The loss of coffee in weight in the roasting operation, or shrinkage as it is called, is a matter which offers opportunities for false claims of advantage in roasting processes. Anybody can see that if just as good roasted coffee could be produced with a lessened shrinkage there would be a chance for a decided increase in profits. It is a sort of finding-money proposition which always turns out to be too good to be true. The purpose of roasting coffee is to produce an article entirely different from green coffee, which is accomplished mainly by driving out moisture. If coffee is roasted thoroughly, inside as well as outside, so as to give the greatest roasted coffee value, it must sustain a proper loss in weight which there is no legitimate way to avoid. The amount of shrinkage varies a great deal with the kind of coffee and its age, also with the kind of roasting desired.

Adding a little water to the coffee at the end of the operation has the advantage of checking the roast at the desired point and helping to swell and brighten the coffee, but it is a practice which is sometimes abused by soaking the coffee with water so as to reduce the shrinkage. This is done either dishonestly, to steal coffee which belongs to somebody else, or foolishly; for the heavier coffee has a lessened cup value which more than counterbalances the apparent gain.

Thanks to the innovation and ingenuity of Jabez Burns and his sons, the Jabez Burns & Sons company lives on as The Burns Company, and continues to produce some of the post popular roasters in North America. Now owned and operated by Probat, Inc. as part of the Probat Group, the company remains dedicated to providing the same quality, dependability, and service that customers love and expect from the world’s most trusted name in comprehensive coffee roasting solutions. The Burns Company designs, automates, and produces three different roasters today: the 23R, a classic machine for modern roasters; the B270R, a smaller but equally flexible roaster; and the B540R, the internationally-available timeless roaster.