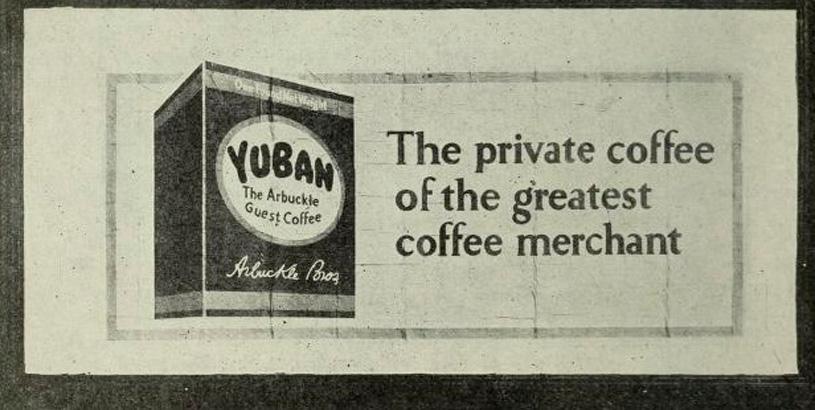 Legends and myth. Apocrypha and simple fictions. It’s that time of year. Coffee has at least one oft-told holiday story and it, too, is a combination of fact and fabrication, or things we just don’t know to be true.

If you want to take the long way around, and we do, our story begins but does not end with John Arbuckle, a man who it seems to me would be happy enough if remembered as a coffee roaster and not much more. But he was much more. He was a philanthropist, innovative entrepreneur, “trust buster,” and inventor. He held several patents on coffee roasters and improvements to the coffee roasting process. He held a patent, appropriately, on a method for fireproofing buildings. He also, it is worth mentioning, invented mittens that included a tube so you could blow warm air from your mouth directly onto your fingers. The last patent he applied for was a method for raising sunken ships, a method so significant in its design that even 60 years later subsequent patent applicants for similar procedures were obliged to cite Arbuckle’s work. That ship lifting patent was approved, but not until after his death in 1912. But we’re getting ahead of ourselves. We’ve killed him already and he hasn’t even been born yet. 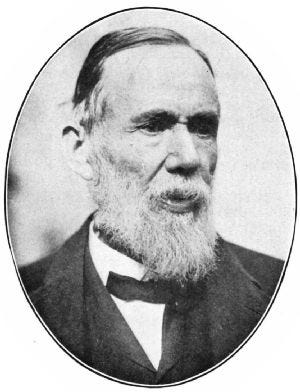 John Arbuckle. Photo: All About Coffee.

John Arbuckle was born in Allegheny, PA, in 1838 where his father, a Scottish immigrant, had been successful as a wool mill operator and running a small grocery business. John’s brother and Uncle started their own wholesale grocery business, McDonald & Arbuckle, in 1859 in Pittsburgh. When John gave up on college and joined the business a year later it was renamed McDonald & Arbuckles and by 1864 only the Arbuckle brothers remained. The company was renamed Arbuckles & Co., and quickly became one of the most successful grocery wholesalers in Pennsylvania.

But something was bothering John Arbuckle. He didn’t like how they sold coffee. They sold a lot of coffee green, leaving customers to roast the coffee at home and thus leaving any judgement as to the quality of the coffee (he was exceedingly “brand conscious”), to roasting methods that were inconsistent at best and burned beans at worst. As for roasted coffee, he recognized early in his relationship with coffee that the flavors deteriorated once coffee was roasted and bulk coffee scooped from barrels in the grocery store was more often than not, stale, another poor reflection on the Arbuckle brand.

He had two solutions, one of which survives today and one that does not, thankfully. He decided that roasted coffee should be packaged immediately after roasting and that fresh out of the roaster coffee should be coated with a sugar and egg glaze to seal the pours in the bean and lock in the flavor. Competitors actually made fun of Arbuckles for selling coffee in bags, “like peanuts.” In 1871, Arbuckles launched its packaged and glazed “Ariosa” coffee, which would become the first successful national packaged coffee brand and eventually obtain the moniker, “the coffee that won the west.” It was said that the egg glaze caused grounds to settle quickly in the cup, and since cowboys drank their coffee “cowboy style,” aka “cupping style” we might say, Ariosa became the coffee of choice out on the range. That same year, John opened a manufacturing branch in New York city, which focused increasingly on coffee and would over time set-aside dealing in other grocery items, except sugar. 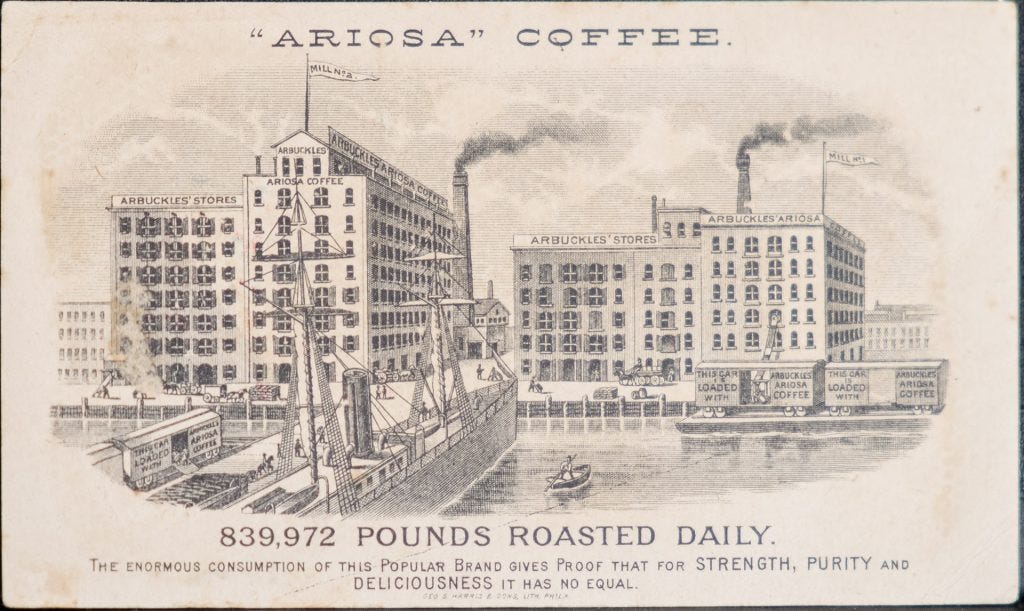 Arbuckles had one coffee roasting machine in operation in 1865. By 1881 they had 85. Eventually, John would design a machine that could roast nearly 5,000 pounds of coffee at a time. He also invented the first machine to continuously weigh, fill, seal, and label coffee packages.

Coffee made John Arbuckle a rich man. He didn’t keep it all to himself, but he didn’t give it away either. Like other philanthropists of his era, he funded his own social projects. He reconditioned old ships to serve as transitional hotels for people who couldn’t afford housing. He started several farms as holiday escapes for the working poor and children with disabilities. He created a retirement community for poor elderly people. But he never lost his competitive zeal and didn’t like monopolies. These are tales for another time and place, but Arbuckle started manufacturing sugar as a challenge to a sugar monopoly, he started a barge service to compete with a monopoly on the Erie Canal, and did the same for tug boat services on the Hudson River. This was in keeping with his effort to own as much of the supply chain as possible, including transportation. Early in the 20th century, Arbuckle Brothers had offices in all the major coffee producing regions.

At some point around the turn of the century—we gather but cannot be sure—Arbuckle created a personal coffee blend that he reserved to give away as a gift to friends and brew for guests during the holidays. While there is enough evidence to assume this is generally true, there is not enough contemporary commentary to declare it fact, and there is no contemporary evidence to suggest this coffee blend had a name.

After a short illness, John Arbuckle died in the spring of 1912. At age 74, he was still active in his business, though his ship raising efforts took up a significant amount of his time. He had offered his ship raising technology to the government but was turned away. So, Arbuckle went about raising recently sunken ships on his own.

When he died, his nephew William, who ran the day-to-day operations, wanted to bring a new blend to market. Arbuckles, and the Ariosa blend in particular, was not known as a high-end coffee. They roasted what we might call “value-engineered" coffee, regular coffee for regular folk (and cowboys). William wanted a piece of the quality coffee market and, it seems, he thought his uncle’s holiday gift blend was just the thing. 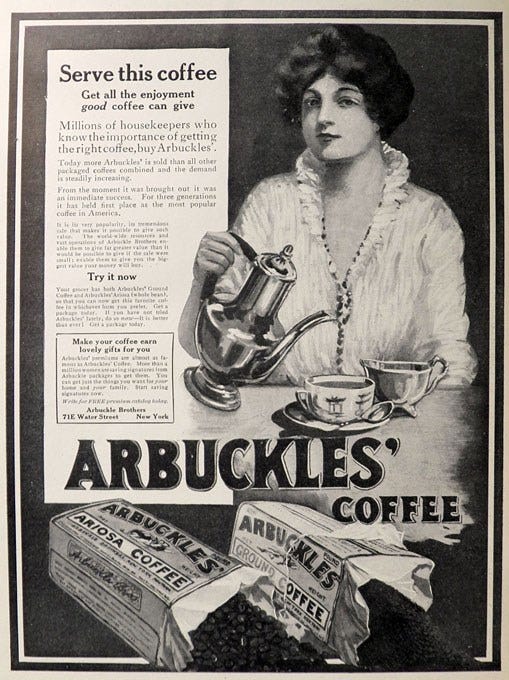 In his determination, and one could assume, without the somewhat austere oversight of his uncle, Billy hired the advertising firm of J. Walter Thompson (JWT) rather than rely on his in-house promotions department. In 1913, it didn’t get any better than JWT, which had innovated magazine advertising and pioneered the application of psychological research and insight in advertising. JWT had created the concept of designing advertisements on behalf of clients (and making a client of those who sought advertising space rather than those who sought to fill it).

JWT created an aggressive advertising campaign focused on New York City, an unapologetic acknowledgement that the coffee would cost more but was worth it, a campaign that would focus not on price but on the feeling associated with drinking the coffee. In the documents that today we would call a “branding brief,” JWT referred to this yet unnamed coffee blend as “Aro.” This reflected the JWT philosophy that a unique, “made-up” name was better than anything common or anything that could be confused with an existing product.

The coffee would eventually be named “Yuban.” But here is where legend comes into conflict with the record. The story most often told is that the name Yuban came from a combination of YUltide and BANquet, a reference to the holiday dinners where John Arbuckle would serve his special blend. It’s a good story, but there is no evidence that it is true. In the records of JWT, there is no reference to this naming prompt. There is no contemporary reference that John Arbuckle ever called any holiday dinner he hosted a “Yuletide Banquet.” This story is repeated hundreds of times on the internet but not one instance cites any source at all, let alone a source anywhere near the creation of Yuban. However, according to author of Uncommon Ground, Mark Pendergrast, who had direct access to JWT records of the time, the name “Arbuckles Christmas Gift” was considered at one point. So, the story of Yuban is a Christmas story, just not the Christmas story we are usually told. 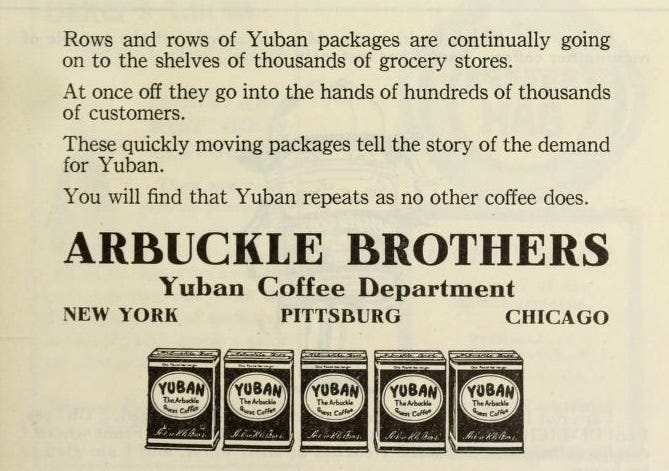 In a Q&A column from 1999, the New York Times relays a somewhat convoluted explanation of the name’s source as the true story and alternative to the Yuletide Banquet tale:

“Bags of green coffee shipped to John Arbuckle, the Brooklyn coffee merchant in question, were marked with the letters A, B, N and Y, for Arbuckle Brothers, New York. When a brand name for the Arbuckle coffee was chosen around 1905, an effort was made to form a word from these letters, but ''bany'' ''abny'' and ''naby'' were found to lack euphony. Someone suggested adding a ''u'' and calling it Yuban…”

I don’t put much faith in this explanation because no citation is provided, and they get the date of the coffee’s introduction wrong.

The Yuban brand is nearly 110 years old. The brand has survived all this time, but the coffee has changed. There are some indications that the blend was originally made of different Central American coffees, something that would have been unusual and truly special when Arbuckle started giving away the coffee and when the brand was introduced into the New York market. In the 1950’s Yuban was heavily marketed as including aged coffee in the blend. TV commercials went to some length to make the case, pointing out that “vintage wine, the choicest cheese, the finest steak," are all aged.

Not long after the Colombian Coffee Federation introduced Juan Valdez and the 100% Colombian campaign in the early 1960’s, Yuban became a 100% Colombian coffee and remained such for decades.

In what must be one of the first ads for Yuban, appearing in the December 21, 1913 New York Times, just one month after Yuban was introduced, the brief column inch copy simply states: Yuban, the private coffee of the greatest coffee merchants, is now offered to the public.” A month later, in the January 18, 1914 edition of the NYT, a large quarter page ad appeared and Yuban had picked up the tag line it would carry, in advertising and on packaging, for many years: “The Arbuckle Guest Coffee.” It sold for 35 cents. The JWT magic worked. In just two years, Yuban went from zero sales to being the number one selling coffee in New York, and then went on to become one of the top selling coffees nation-wide for decades. 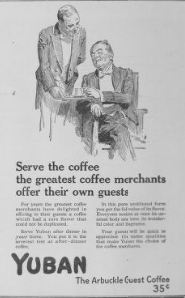 So it is that Yuban is our most enduring Christmas coffee. Even if the name was not constructed from “Yuletide Banquet,” the story is consistent with the coffee’s original intent, which is perhaps why it persists. The holiday coffee tradition does not go back that far. Though it may have existed among some roasters, the concept of a heavy bodied, spice and chocolate coffee suitable for cold weather consumption was popularized, if not invented, by the specialty coffee industry.