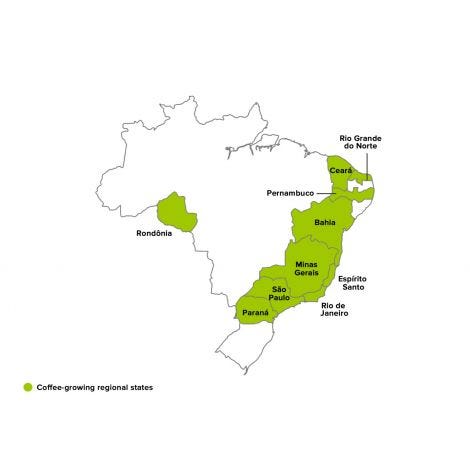 Brazilian Arabica coffees have very peculiar characteristic in term of body and sweetness which makes it an ideal ingredient for a true espresso. In collaboration with our Brazilian specialty team we have developed a signature coffee which aims to capture the ideal espresso profile. Eagle Espresso blends 70% natural with 30% pulped natural - typically from the region of Bahia - to achieve a perfect balance of sweetness and body with quintessential notes of cocoa, toffee and dried fruits.

Growing altitude for this coffee ranges between 700 and 1,350 masl. We source from multiple trusted producer-partners throughout the states Minas Gerais & Bahia who cultivate the varieties of Catuai and Mundo Novo.